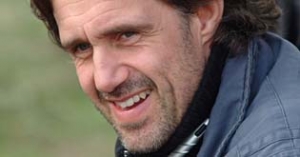 Jan Hinrik Drevs, born 1968 in Lübeck, studied rhetoric, Romance studies, and political science in Hamburg and Tübingen. During a one-year study stay in the United States he turned towards the film business. Drevs graduated from a master program in the department of "Broadcasting & Film" in San Francisco.

Since 1998, Drevs is working as a freelance writer and filmmaker. He made numerous documentary films for several TV stations that were critically acclaimed at several international festivals and even won a couple of awards. Drevs, for instance, won the viewer"s choice award at the documentary film festival in Yamagata, Japan, for his film "Herr Pilipenko und sein U-Boot" ("Mr. Pilipenko and His Submarine") together with his co-director René Harder.

In 2008, Drevs made his debut as a feature film director with the comedy "Underdogs" - although the film"s story about an prison inmate project, where inmates are supposed to get positive influences by training guide dogs for the blind, is based on a documentary film Drevs finished in 2001.