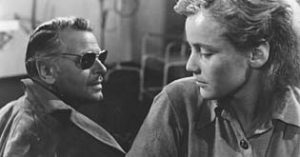 After the end of WWII, young refugee Eva works as a film extra. During one test shoot, she gets the attention of ambitious director Tornau. Seeing dramatic potential, Tornua wants to adapt Eva′s eventful life story for the screen and even casts her in the title role – much to the disapproval of his author and his star actress. Eva′s husband Stefan also objects, fearing the exploitation of their past. Indeed, the shoot affects the young woman emotionally, and she eventually breaks down in the climatic scene in which her character has to leave behind her wounded husband. Overwhelmed by powerful memories, Eva breaks down. But being forced to re-enact her traumatic experiences has also a therapeutic effect, and leads to Eva′s true reconciliation with Stefan.