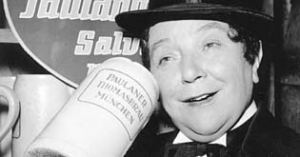 Liesl Karlstadt, born December 12, 1892, as Elisabeth Wellano in Munich, at first worked as a salesclerk and as a baker. At the age of 20, she became a singer and dancer for Adalbert Meier's musical comedy group and performed as an actress on stage in plays such as "Kabale und Liebe" and "Die Kameliendame".

Karlstadt appeared in numerous comedic silent movies during the 1920s. In 1930, she decided to attend professional actor's training. Nevertheless, she did not manage to escape Valentin's shadow. Moreover, their relationship in private was not always the best. After the wayward Valentin had lost Karlstadt's entire fortune through a bad investment, she attempted suicide. After her recovery, Karlstadt played in a couple of successful films such as "Der Bittsteller" or "Beim Rechtsanwalt" (both 1936) – again alongside Karl Valentin.

Karlstadt's popularity continued also after Valentin's death in 1948, but in the following years she was more successful in more serious roles at the Munich Residenztheater and the Kammerspiele. At the Bayerischer Rundfunk she got her own show with "Familie Brandl". On the big screen she mainly appeared in supporting roles. To her most famous movies of this time belong "Fanfaren der Ehe" (1953), "Die Trapp-Familie" ("The Trapp Family", 1956) and the satire "Wir Wunderkinder" ("Aren't We Wonderful?", 1958).

On 27 July 1960 Liesl Karlstadt died of a stroke in Garmisch-Partenkirchen. The "Valentin Karlstadt Museum" in Munich is dedicated to her and Karl Valentin.