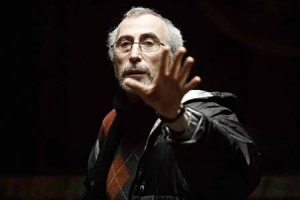 Dito Tsintsadze, born 1957 in Tbilisi, studied at the Theatre and Film Institute in Tbilisi from 1975 to 1981. He then worked as an assistant director until 1989. From 1990 on, he made several short films and TV movies for the production company Schvidkatsa. Tsintsadze won the Silver Leopard at the 1993 Locarno film festival for his film "Zghwardze"/"On the Borderline" abou the civil war in Georgia. Tsintsadze then worked for an Italian production company from 1993 to 1996. After receiving a film scholarship for Berlin in 1996, Tsintsadze and his family lived alternately in Germany and in Georgia for several years.

In "Der Mann von der Botschaft" ("The Man from the Embassy"), his third film produced in Germany, Tsintsadze again portrays people who are living abroad or in a world they have become alienated from – but are forced by unexpeced events to fundamentally challenge their existence.

Following the TV thriller "Riverse" (2006), Dito Tsintsadze directed "Mediator" (2008), which recounts the story of a murder from different perspectives. Lead actor Burghart Klaußner also starred in Tsintsadze's next feature "Invasion" (2012), playing a grieving widower who invites several alleged relatives of his late wife to live in his house and gradually loses control of his own home.