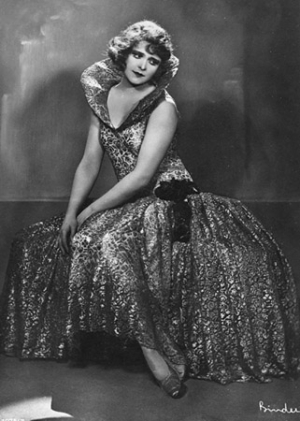 Liane Haid was born in Vienna on August 16 1895. As a child, she was already trained as a singer and dancer, starred in productions at the Vienna opera house and performed as a ballet dancer in Budapest. Later, she also appeared as an opera singer in Berlin and Vienna, using the stage name Hypolita d"Hellas. During WWI, producers Anton Kolm, Luise Fleck and Jakob Fleck signed her as a screen actress for the Wiener Kunstfilm GmbH. Mostly playing the role of the cute girl, she appeared in patriotic propaganda films and scenic entertainment fare, and became popular in wartime Austria.

At the beginning of the 1920s, she moved to Berlin and starred alongside Conrad Veidt, Werner Krauß and Reinhold Schünzel as the titular hero in Richard Oswald"s historical drama "Lady Hamilton". She then appeared in films produced by Micco-Film – a company founded by her husband Baron Fritz von Haymerle and actor / director Reinhold Schünzel –, including "Roman eines Dienstmädchens", "Das Geld liegt auf der Straße" and "Der Pantoffelheld". In 1922, she again played the leading role in a period piece by Oswald, "Lucrezia Borgia", which also featured Conrad Veidt, Albert Bassermann and Paul Wegener.

In Germany, Haid primarily worked for the Ufa. Typecast as the charming Viennese girl , she went on to become one of most popular film stars, and she easily made the transition from silent to sound cinema. In 1930, she turned the song "Adieu mein kleiner Gardeoffizier" into a hit when she sang it in Geza von Bolvary"s "Das Lied ist aus". And Haid and her frequent co-star Willi Forst were a favourite dream couple on the screen.

From the mid-1930s on, she gradually withdrew from movies and focused on theatre work. Her last starring roles were in E. W. Emo"s "Wer zuletzt küsst…" and Carl Lamač"s "Peter im Schnee". In 1942, she and her son relocated to Switzerland, and Haid later accompanied her third husband, a doctor for tropical diseases, on his travels. In 1953, she had a short comeback with the Austrian production "Die fünf Karnickel", then she retired from acting for good.

She made headlines when she divorced her husband at the end of the 1960s, and again in the early 1990s, when she tried to claim an apartment building which she had bought in 1938 from a Jewish family forced by the Nazis to sell its property.