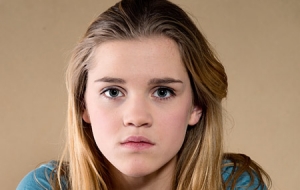 Nele Trebs was born in Berlin on September 12 1999. Since her mother runs a talent agency, she (like her siblings Theo, Enno, Lilli and Pepe) got to know the film business at a very early age. She made her acting debut in the TV miniseries "Die Patin – Kein Weg zurück" (2008), playing the daughter of lead Veronica Ferres' character. Trebs next appeared in the theatrical release "Mensch Kotschie" (2009), and the miniseries "Krupp – Eine deutsche Familie" (2009, TV), in which her brother Theo also had a supporting role.

Director Anno Saul cast Trebs as the daughter of a murdered couple in his mystery thriller "Die Tür" (2009). After more TV appearances, she made a memorable turn as a young girl who journeys with her older sister through the war-torn Germany of 1945 in the acclaimed feature release "Lore" (2012). Trebs went on to star opposite Anne Ratte-Polle in "Wanja", which premiered at the 2016 Berlin IFF.