LOMO - The Language of Many Others 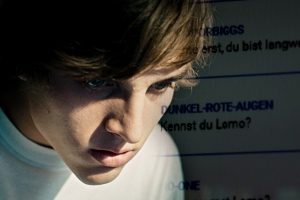 Karl is about to finish high school, his future lies ahead of him. His father is an architect, his mother a former singer who spends all her time on the computer with role playing games. They are liberals, so the sky's the limit for their kids. Karl's ambitious sister Anna already knows she’s moving to Canada to study International Communications. Paul, his best friend, wants to marry his childhood sweetheart and start a family. Karl finds this ludicrous – and sees in his parents’ world an ill omen of his own future.

He spends most of his time on the Internet with his blog "LOMO – The Language of Many Others", collecting photographs and videos and compiling them into series. Is identity just an illusion? Many of his followers ask themselves this very question.

When Karl falls in love with Doro, he thinks he finally knows what he wants. Doro is also taken with her opinionated and rebellious classmate. But Karl’s luck is short-lived and Doro loses interest. For Karl, one thing is clear now: nothing is true, everything is random.

Disillusioned, he starts playing a dangerous game. His followers take increasingly more control of his life, making decisions for him, and eventually ruling over matters of life and death. Only at the last moment does Karl understand that he cannot step back from his own life because he has a responsibility towards the people who matter to him.