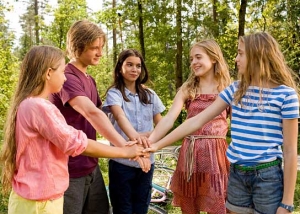 Following on the first film's more than one million admissions, Sophia and Jana Münster, 2010 Bambi winners in the Talent category, return to their Lindenhof Academy. The summer holidays might be over but no sooner have they arrived than things are off! Frau Theobald has to go away and, much to Frau Mägerlein's great annoyance, hands over the running of the school to the lovable but very chaotic French teacher, Madame Bertoux.

Bertoux appears overwhelmed by her duties very quickly – the budget is tight and she also has to take care of her nephew Philippe, who is visiting the girls' boarding school for two weeks. But this is not the only exciting new development: there is a rumor flying around that a real live princess is among the new girls, but she absolutely, positively, has to remain incognito.

Lilly, the twins' annoying cousin, who is also now attending Lindenhof, much to their great regret, is also trying to find out the princess' identity so she can suck up to her. Nanni, for her part, has quite different concerns: she is deeply troubled by her fears her parents' marriage is in a crisis. The parents, however, are using all means possible to prevent the twins from finding out about their problems. But why, then, has their father George moved into a hotel and what is he doing, suddenly appearing at the boarding school and working as an assistant cook? It’s going to be another turbulent and exciting school year for Hanni, Nanni and their friends at Lindenhof!