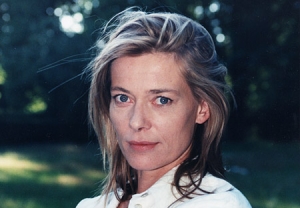 Barbara Rudnik was born on July 27, 1958, in Wehbach at the Sieg as the youngest of three daughters of a lathe operator and a sewer. After finishing secondary school she began to work as a bookseller before students of Munich's Hochschule für Film und Fernsehen discovered her acting talent.
From 1978 on, Rudnik attended actor's training at Zinner-Studio. After several roles in student films, Rudnik made her movie debut as a daydreaming cinema cashier in Beate Klöckner's "Nightfall" (1981).

She then played in Jochen Richter's "Am Ufer der Dämmerung" (The Edge of Darkness) and in Hans-Christoph Blumenberg's debut movie "Tausend Augen" (Thousand Eyes) in the role of a student who works part-time as a striptease dancer. With her subtle play, Rudnik then became one of the most sought-after German movie and TV actresses. Henceforth, Rudnik starred in several movie productions like the Austrian farce "Müllers Büro" (1986) and the German comedy "Der Unsichtbare".

During the filming of the co-production "Douce France" in the 1980s, Rudnik worked in France for the first time and played in several French TV productions in the following years. In the 1990s, Rudnik played in the startling TV production "Der Sandmann" and the movie thriller "Solo für Klarinette" (Solo for Clarinet), both directed by Nico Hofmann. Furthermore, Rudnik starred in Sönke Wortmann's university satire "Der Campus" (Campus) and in Thorsten Schmidt's romantic comedy "Schnee in der Neujahrsnacht" (Snow on New Year's Eve). In 2002, Barbara Rudnik became detective Simone Dreyer from Offenbach in the TV series "Polizeiruf 110". From 2003 on she played a police psychologist in the ZDF-series "Solo für Schwarz".

Meanwhile, Rudnik played alongside Josef Hader in the successful Austrian crime movie comedy "Komm, süsser Tod" (Come Sweet Death). Her last roles in feature films were one of the leading roles in Johannes Brunner's ensemble film "Oktoberfest" (2005) and a part in Til Schweiger's box office hit "Keinohrhasen" (Rabbit without Ears, 2007).