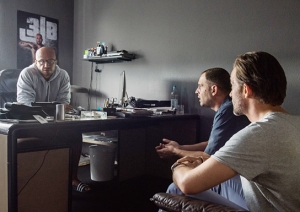 Dar Salim was born on 18 August 1977 in Baghdad, Iraq. When he was one year old, the family fled their homeland and, after stops in Syria and Bulgaria, finally received asylum in Denmark. At that time Salim was seven years old. After finishing high school, he volunteered for the military and became a soldier in the Royal Life Guard. In 2002 he completed his training as a pilot and was active in civil aviation from 2004.

During this training Salim also took acting lessons in New York and London as well as with the Danish actress Sarah Boberg. He had his first small role in 2003 in an episode of the Danish television series "Forsvar". In 2009 he gave up his career as a pilot in favour of an acting career.

Salim was nominated for the Danish Film Prize Bodil for his leading role in the feature film "Gå med fred Jamil - Ma salama Jamil" ("Go with Peace Jamil", DK 2009), playing an Arab in Copenhagen torn by inner conflict. He has had supporting roles in Thomas Vinterberg's crime drama "Submarino" (DK 2010) and in Lee Tamahori's Saddam Hussein thriller "The Devil's Double" (2011), both of which premiered at the Berlinale. He had appeared as Blood Rider in the first season of "Game of Thrones" (US 2011) and as chairman of a left-wing ecological party in the Danish political series "Borgen" (DK/DE 2010-2011). For his leading role as newspaper photographer and close confidant of an investigative journalist in the crime series "Dicte" (DK 2013-2016) Salim was nominated three times for the Danish Film Prize 'Robert' (2014, 2015 and 2017). He received another 'Robert' nomination for his leading role in the revenge thriller "Underverden" ("Darkland", DK 2017). Important roles on the big screen were those of a captain in the biblical epic "Exodus: Gods and Kings" (US 2014, directed by Ridley Scott) and as the closest confidant of a Danish commander in the Afghanistan war drama "Krigen" (DK 2015).

Salim played his first German-speaking role in Florian Baxmeyer's "Brüder" (2014), an episode of the crime series "Tatort", as the head of a criminal clan. In the comedy "Macho Man" (2015), directed by Christian Ulmen, he portrayed the Turkish brother of Aylin Tezel's main character. In the TV two-parter "Spuren der Rache" (2017), he was seen as the bodyguard of a Moroccan arms dealer. He made a small appearance as a jailbird in the stoner comedy "Lommbock" (2017).

Despite his involvement in German and other international productions, Salim remained mainly active in Denmark. For his leading role as an undercover investigator in the thriller series "Kriger" (DK 2018) he received another 'Robert' nomination, as well as for his supporting role as a widower with a dark past in the crime series "Fred til lands" (DK 2019).

Salim played his first leading role in a German production in Johannes Naber's "Ohne Titel" (2020). In the film he plays an Iraqi refugee, who in 2003 gives a fanatical German secret service agent supposedly solid evidence of weapons of mass destruction. The grotesquely satirical political drama celebrated its world premiere at the Berlinale 2020.

Dar Salim lives in Copenhagen with his family.