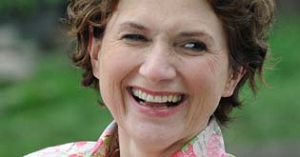 Victoria Trauttmansdorff was born in Vienna on September 8 1960. Following her high school graduation, she studied acting in Salzburg, yet she quit her class after two years in order to accept an offer from the Schauspielhaus in Düsseldorf. She performed at the Nationaltheater in Mannheim and the Schauspielhaus in Stuttgart before becoming a company player at the Thalia Theaer in Hamburg. There she had many memorable turns, for instance in in productions of "Kabale und Liebe", "Geschichten aus dem Wiener Wald", "Time Rocker", "Der Kuss des Vergessens" and "Nora".

Since the early 2000s, Trauttmansdorff has also been appearing in ambitious film and TV productions, including Christian Petzold's "Gespenster (2005), Christoph Hochhäusler's "Falscher Bekenner" (2005) and the acclaimed drama "Gegenüber" (2007), which garnered her a Best Actress nomination at the 2008 German Film Award.  Moreover, she had guest-starring turns in popular TV series like "Bloch" and "Tatort".