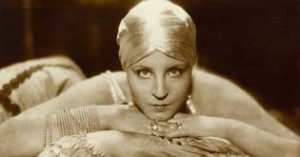 Based on the medieval legend of the Mandrake, a root, which grew beneath the gallows from the semen of hanged men, Hanns Heinz Ewers novel Alraune was brought to the screen in 1928 by Ama-Film GmbH and director Henrik Galeen (The Student of Prague 1926, Nosferatu 1922 – as screenwriter). Paul Wegener (The Golem 1920, The Magician 1926) stars as Professor Jakob ten Brinken, the "world famous authority on genetic cross-breeding", who implants a prostitute with the 'seed' of a hanged man in order to study the effects of environment over genetics on the offspring. The resulting child is Alraune, whom Brinken calls 'Mandrake', played by Brigitte Helm (Metropolis 1927, The Love of Jeanne Ney 1927). Alraune is raised in a convent, ignorant of her origins, believing Brinken is her father. Just as the Professor is convinced, his 'experiment' has overcome her genetic history she runs away with a boy and begins a life of troubled encounters with men. Helm is both innocent, alluring and at times intensely evil in this captivating performance of a lovely young girl, both attracted to and in conflict with the men in her life. As in the novel, which this film closely follows, the idea and understanding of love is unknown to Alraune. As she chats with a circus magician she shares her train compartment with, his real intentions unknown to Alraune, he entertains her with slight-of-hand tricks. He produces a live mouse that he places on her leg and it quickly crawls under her skirt as the girl calmly observes. " What? You are not afraid of mice? Little girl. You will make something of yourself." While the film was heavily censored in 1928, this surviving scene must have been, and remains today, tremendously provocative.

Brinken eventually finds Alraune, living as a circus performer, just as she rebels against the magician's attempts to control her flirtations with another man. " Stop me if you can!" In one of the most electrifying scenes in all of Weimar Cinema, Alraune opens the door to the lion's cage now on the stage and steps in. As the curtain opens, the crowd reacts in utter horror while, outside the cage, circus performers furiously run in all directions. Alraune stands before several enormous lions she teased only moments earlier, completely motionless, as the camera cuts to a close-up of her penetrating eyes.

Once they are away from the circus, Brinken determines to start a new life with the girl, but Alraune again plots to run away with another man. As she is leaving, she finds the Professor's diary and discovers the truth of her existence, "Where do I belong in society?" Alraune bitterly decides to stay with Brinken and seek her revenge, feeling unfit for the man she now loves. She tortures Brinken by constantly flirting with men. As her ultimate insult, Alraune, dressed from head to tow in shimmering silk, seduces Brinken, "Do you really think I haven't known all along that I am not your daughter?" She runs off, depriving him and the torture continues. Financially and morally destitute, Brinken confronts Alraune as she packs her bags to leave. In a harrowing scene, he chases her from room to room with a large knife. Just as her death seems imminent, Alraune is saved by her lover and Brinken is left to suffer "the hell of loneliness and insanity."

An overlooked treasure, Alraune represents the height of silent film in the Weimar era. With the exception of early scenes featuring Alraune's 'mother' and the convent, the film is entirely occupied by men, surrounding Helm like the unnoticed setting of a luminous jewel.