The Sale of the DEFA

In the 1980s the central film distributor, Progress, began importing more light entertainment from the west, increasingly relegating DEFA films to the art house and youth club niche. The DEFA's production managers were confronted with a new dilemma, one which reflected the overall state of the East German economy: to continue reaching their audience, they had to keep up with western standards of film technology, a daunting task with so little hard currency at their disposal. 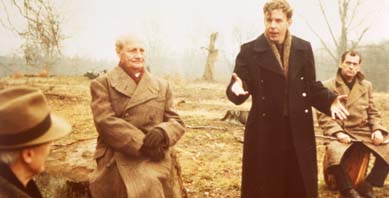 Moreover, to capture their audience's attention, they had to permit a more critical treatment of social issues – yet this approach was rejected by the party bosses. One of the last attempts in this vein was Lothar Warneke's "Einer trage des anderen Last..." ("Each Must Carry the Other's Burden", 1987), a half-hearted plea for more mutual tolerance between church and state. It was a great hit with audiences; the film discussions so popular in the GDR provided an occasion to confront deeper issues. At the same time, the DEFA intensified its Western European contacts by pursuing co-productions with Austria and the advance sale of films to West German television. The proceeds were used for such things as purchasing color film material (the DEFA's own ORWO material was too insensitive and lacked brilliance) and music copyrights. In the 1980s increasingly close connections developed with West Germany. For example, the DEFA offered West German film companies and television stations the opportunity to shoot films in the GDR using the renowned craftsmanship of the DEFA's staff – such as the 1982 film "Frühlingssinfonie" ("Spring Symphony") by Peter Schamoni with Nastassja Kinski and Herbert Grönemeyer) – and carried out commissions for West German television. Ultimately, in 1988 a film aimed openly at the West German market was produced: "Der Bruch" ("The Break-In"), with West German star Götz George was directed by Frank Beyer, who had already been working mainly in the west for some time, and the screenplay was written by Wolfgang Kohlhaase. In this film Beyer returned to his favorite genre, realistic comedy set in post-war Berlin, working with actors from both sides of the Wall. 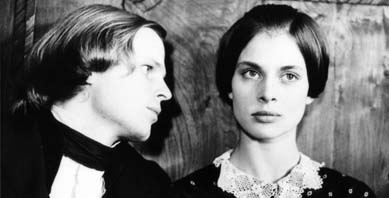 The long-time Director General of the DEFA, Hans-Dieter Mäde, also a member of the Central Committee of the SED, retired in 1988 and was replaced by technical director Gert Golde, who managed to weather all the political and social upheavals of the coming years. Chef-Dramaturg Rudolf Jürschik, who had fought hard but with little success to gain greater artistic and critical scope for the studio, assumed the newly-created position of artistic director. Consequently, once-rejected projects were revived, and new projects were developed without regard to old taboos. The fall of the Berlin Wall in November 1989 and the collapse of the SED leadership left the DEFA with a strange dilemma: critical films reflecting the new political situation, which would have created a sensation just a few months previously, were ready to be shown – but the audience had vanished. East Germans were either touring the west in their Trabis or had simply lost all interest in everything having to do with the old regime.