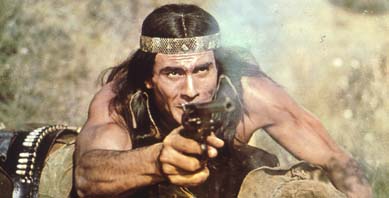 In 1962, Harald Reinl's first Karl May film "Der Schatz im Silbersee" ("Treasure of Silver Lake") launched a popular wave of West German westerns. Four years later, the DEFA began producing westerns of its own. On more than one level, the DEFA's "eastern westerns" emerged as foils to the western productions by Horst Wendlandt and Artur Brauner. While the West German Karl May adaptations featured an equally noble "white blood brother" at the side of Pierre Brice as the Apache chief Winnetou, the DEFA productions concentrated to a much greater extent on the Indian protagonists – and what they saw as the "historical truth" and "the Indians' great personal developments". 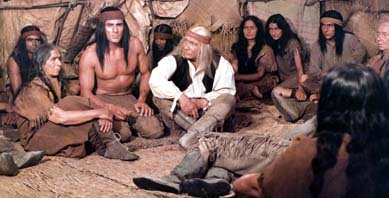 In 1966 – the year of "Winnetou und das Halbblut Apanatschi" ("Half-Breed"), one of the last Winnetou films to play West German movie theaters – "Die Söhne der großen Bärin" ("The Sons of the Great She-Bear") appeared, the DEFA's first western. It was based on an internationally successful book series by Lieselotte Welskopf-Henrich, who also wrote the screenplay. As shown by the correspondence between Welskopf-Henrich and the studio management, the DEFA was expressly interested in historical accuracy, something of little importance for West German westerns. The didactic aims of historical materialism came across strongly here; the emphasis on the daily life of America's native inhabitants resulted in films which were not westerns so much as "historical adventure films in an Indian milieu". At the same time, the DEFA's westerns were often filmed in the same parts of Yugoslavia where the Winnetou films were made.

A Star is Born: Gojko Mitic 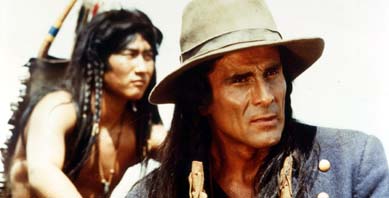 Soon after opening, "Die Söhne der großen Bärin" had attracted eight million movie-goers in the GDR, due in large part to the film's star. Gojko Mitić featured as a supporting actor in five Karl May westerns before carrying numerous DEFA productions as a (physically much more imposing) counterpart to Winnetou. In contrast to Pierre Brice, Gojko Mitić appeared in a number of different Indian roles (such as the eponymous hero of "Chingachgock - Die große Schlange" ["Chinachgook - the Great Serpent"], "Severino" and "Osceola", and two appearances as Ulzana in "Apachen" ["Apaches"] and "Ulzana"), but he was still as popular in the GDR as Brice was in the west. In certain respects the disparate heroes portrayed by Brice and Mitic played a similar cultural role. Both Indian fads reflected conservative reactions to innovation. In the west, the conciliatory escapism of Karl May's world contrasted with the advent of the New German Cinema signaled by the Oberhausener Manifesto, published in the same year Reinl's "Der Schatz im Silbersee" appeared. In the east, the flood of politically correct DEFA westerns began after the 1965 ZK (Central Committee) Plenum banned virtually the entire output of the DEFA from that year.

DEFA Indians and Karl May 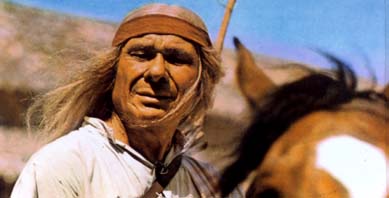 Before "Der Scout" ("The Scout") from 1983, Mitic's western roles – as in "Spur des Falken" ("Trail of the Falcon") and "Tödlicher Irrtum" ("Fatal Mistake") – were repeatedly those of heroes who resist exploitation and oppression at the hands of white usurpers. In the 1975 film "Blutsbrüder" ("Blood Brothers") he was backed up by the singer and DEFA star Dean Reed, who also played a frontiersman in the DEFA films "Sing, Cowboy, Sing" and "Kit & Co". As part of the socialist anti-imperialist program, the DEFA productions always had a different ideological thrust than Karl May's fantasies about the Christian chief Winnetou with his "almost Roman traits". But, just as in the West German productions, stereotypes flourished, drawing a clear-cut picture of good vs. evil. In the final years of the GDR Gojko Mitić played Karl May material one last time, portraying Bärenauge, the protagonist of the two-part East German miniseries from 1988, "Präriejäger in Mexiko" ("Prairie Hunters in Mexico"), based on May's novels "Benito Juarez" and "Trapper Geierschnabel". In a way, these productions foreshadow the further course of Gojko Mitić's career, when his complex relationship with the West German Indian star Winnetou reached a high point. After the DEFA was dissolved, Gojko Mitić succeeded Pierre Brice in the role of the Apache chieftain at the Karl May Festival in Bad Segeberg.