Film in the GDR 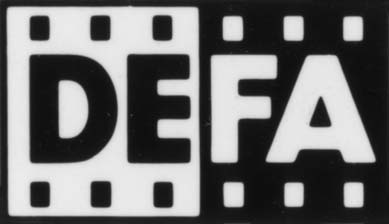 The name DEFA, reminiscent of the corporate name Ufa, evokes a capitalist production company. All the same, from the outset the DEFA stood for the very opposite, both with its structure, its staff and its productions. The abbreviation for "Deutsche Film AG" (German Film Corporation) denotes East Germany's only official film production organization, which existed from 1946 to its liquidation in 1990 – nearly 45 years, longer than the GDR itself.

The DEFA was officially founded on May 17, 1946 in the former Althoff Studios in Potsdam-Babelsberg. The Soviet Military Administration (SMAD) handed over the license to "Filmaktiv", a group of committed filmmakers and German Communist Party (KPD) members. The DEFA was controlled by the Soviets, and in 1947 it was transformed into an SAG (Sowjetische Aktiengesellschaft, Soviet corporation) with an executive board made up of Russians and Germans. After the foundation of the GDR in 1949 the DEFA gradually passed into German hands, that is, to the new SED government (Sozialistische Einheitspartei Deutschlands, Socialist Unity Party of Germany). On October 1, 1950 the DEFA Film Studios were established, along with a studio for newsreels and documentary films and a studio for animated films in Dresden. In 1953 they received official VEB status (Volkseigener Betrieb, nationally-owned factory). 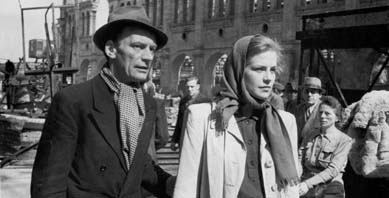 Source: DIF, © DEFA-Stiftung
Wolfgang Staudte and Hildegard Knef during the shooting of "Die Mörder sind unter uns" ("The Murderers Are Among Us / Murderers Among Us", 1946)

The DEFA was based on the kind of traditional studio structure used in the Ufa and in Hollywood of the 1930s, but with one crucial difference: in Hollywood and even in Nazi Germany a number of production companies existed in competition, while in the GDR there was only one, and it was controlled by state and party functionaries, with the Hauptverwaltung Film playing the crucial role from 1954 onward. The official policy was to hire no directors or screenwriters tainted by association with National Socialist propaganda films. However, those who had worked in a "merely" technical capacity during that period were welcome. 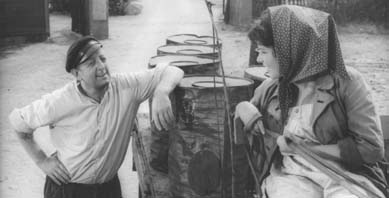 In the tradition of all major studios, the DEFA Studios in Potsdam-Babelsberg (the former "Ufa city") had professionals in nearly all branches of the film industry on its payroll: screenwriters, directors, scenographers, cameramen, technicians and even an ensemble of actors. The result was a high level of technical expertise, especially in the field of set design, where the old German tradition of masters and apprentices continued to flourish – carried on from the 1920s by Willy Schiller to his assistant Alfred Hirschmeier. On the other hand, artistic freedom and risk-taking was limited: concepts, scenarios and screenplays were subject to a gauntlet of reviews by studio and party functionaries. The DEFA signet is associated with a host of important and influential directors, including Frank Beyer, Wolfgang Staudte, Kurt Maetzig, Konrad Wolf, Volker Koepp, Barbara Junge and Winfried Junge. Yet it was difficult to become a director without following a strictly predefined path which included attending the Babelsberg Film Academy, founded in 1954 as the Deutsche Hochschule für Filmkunst (German Academy for Film). At the same time, the DEFA managed to get many of the country's major writers involved in film projects: Christa Wolf, Klaus Schlesinger, Fritz Rudolf Fries, Günter Kunert, Franz Fühmann. Others – Günther Rücker, Jurek Becker, Ulrich Plenzdorf, Helga Schütz and Regine Kühn – worked as freelance or salaried screenwriters. With a large pool of outstanding actors at its disposal (most of them from East Berlin theaters), the DEFA produced first-rate film actors, some of whom – such as Manfred Krug, Armin Mueller-Stahl, Angelica Domröse and Jutta Hoffmann – became stars whose popularity endured even after their defection to the west. East Germany's most popular star was Erwin Geschonneck. As a communist in Nazi Germany, he was forced to emigrate, only to be extradited to the Nazis by the USSR, after which he survived several years in a concentration camp. After the war he worked with Bertolt Brecht at the Berliner Ensemble. On several occasions he used his influence to lift the prohibition on blacklisted films (his own included).

The DEFA produced more than 700 dramatic feature films, including approx. 150 children's films, with more than 600 films produced for television between 1959 and 1990. In addition, about 750 animated films and approx. 2,250 documentary and short films were produced, with documentary films developing into an especially important sector. The first DEFA production was also Germany's very first post-war film. Wolfgang Staudte's "Die Mörder sind unter uns" ("The Murderers Are Among Us / Murderers Among Us"), from 1946, launched a long-term DEFA policy: in its style, content and ideology, it was a reaction against the propaganda films of Nazi Germany, a tactic which was to be especially successful in the DEFA's early classics. 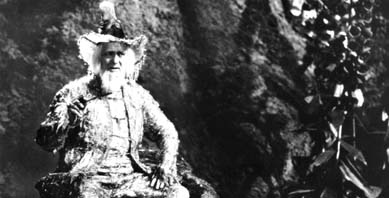 Though designed for homogeneity, over the coming decades the DEFA would foster a wide range of artistic developments. Alongside the ongoing production of light entertainment, it made films in the style of socialist realism, fairy tales and literary adaptations, staunchly antifascist films and "eastern westerns (Indianerfilme)" with a political subtext, as well as productions which took a critical view of contemporary social issues and provoked conflicts and bans. This was followed by further experiments such as the documentary dramas, fueled by the hope for more liberal cultural policies once Walter Ulbricht was succeeded by Erich Honecker in 1971. Ultimately, however, what dominated was the externally-imposed avoidance of critical approaches to political and social issues, or the tendency to veil this criticism. 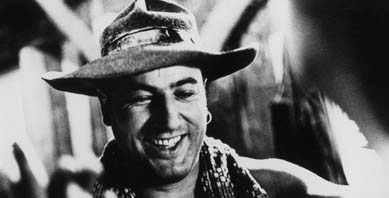 In the 1980s the GDR opened its film market to western productions, one of the major factors leading to a crisis at the DEFA. Finally, the end came with the fall of the Berlin Wall and the reunification of Germany. In July 1990 the DEFA passed into the administration of the Treuhand, the agency charged with managing and privatizing the property of the former GDR. Since August 1992, when the former DEFA Film Studios in Babelsberg were taken over by a media concern and nearly all DEFA's employees were dismissed, the Babelsberg studios have been owned by private-sector companies. On October 13, 1993, the last feature film with the DEFA signet, Herwig Kipping's "Novalis - Die blaue Blume" ("Novalis - the Blue Flower"), celebrated its premiere. The DEFA estate is presently administered by the DEFA Foundation.