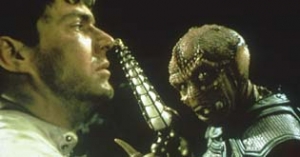 Sci-Fi based on the eponymous short story by Barry Longyear: Humanity is at war with the lizard-like Dracs. After a battle, space fighter pilot Willis Davidge is forced to land on an alien planet and discovers that his enemy, Drac Shigan, has also landed there. After another fight, Shigan manages to capture Davidge. But to survive in the inhospitable environment, the two must work together. They each learn the language of the other, and eventually they become friends. Their attachment goes so far that when Shigan dies, Davidge cares for his offspring by saving him from people who keep Dracs as slaves. In the end Davidge even gets honored on the home planet of the Dracs.