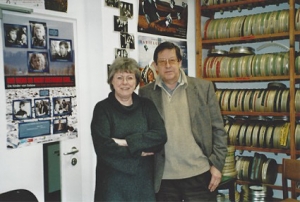 Winfried Junge was born July 19, 1935, in Berlin. After finishing schol in 1953, he started to study German philology at the college of education at Berlin's Humboldt university. In 1954, he was one of the first students to enroll at the new Deutsche Hochschule für Filmkunst in Potsdam-Babelsberg. Furthermore, he published film reviews from 1951 to 1955. After receiving his diploma, he started to work for the DEFA studio of popular science films, at first as a dramaturgy assistant, then three years as the assistant director to Karl Gass.

In 1961, Junge was contracted as a director for the DEFA studio for news reels and documentary films. Furthermore, he finished "Der tapfere Schulschwänzer", based on the screen play by Vera and Claus Küchenmeister, in 1967. This children's movie – filmed in a documentary style – shows the discovery of the newly constructed centre and old town of East Berlin from the perspective of an eleven-year old school boy. In 1961, Karl Gass encouraged Junge to do a documentary film about the transition from kindergarten to first grade in school. Junge chose a group of children from the village of Golzow, in the district Seelow in the area of Frankfurt (Oder). The short documentary film "Wenn ich erst zur Schule geh' ..." that turned into the long-term film project "Chronik der Kinder von Golzow" although this had not been planned in the beginning. Later, his wife Barbara whom Junge married in 1968 started to contribute to the films and became the editor for all his films when his long-time editor Charlotte Beck died.

In March of 1991, the Junges ended their work for the DEFA studios. In the following years, they continued their work for "Golzower Chronik" – partly supported by TV stations – Klaus Volkenborn's "Journal-Film". In 1994, Klaus-Dieter Schmutzer's "a jour Film- und Fernsehproduktion GmbH" became their new production company. Since then, Barbara and Winfried Junge regularly put out feature-length documentary films about the lifes of the individual Golzow protagonists by combining previously unreleased material with new takes.

Winfried and Barbara Junge are living in Berlin.