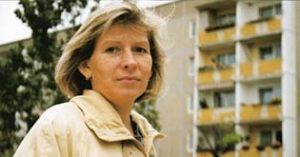 I′ll Show You My Life - Marieluise, A Child of Golzow

Marieluise went to school in Golzow/Oderbruch for ten years. She became a chemical lab technician, but she didn′t enjoy the work much. The eldest daughter of six children of a dairy farmer would have preferred to have become a nurse.

The 42-year-old is now a dental nurse. A real eye-catcher for the boys even as early as her schooldays, she married late although it wasn′t a church wedding because bridegroom Steffen was a regular officer in the GDR people′s army. She remained faithful to him despite, or precisely because of, the many problems that presented themselves for the family over the years. For Steffen was subject to all sorts of obligations regarding discipline and secrecy as a member of the government echelon. And they had two daughters. Marieluise heaved a sigh of relief when the Wall fell. Steffen was taken on by the German army. The film ends with the family moving to the West, the only one to do so so far from Golzow.