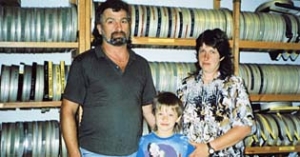 The Story Of Uncle Willy From Golzow

After eight years of schooling, Willy had only managed to reach the seventh grade. He was the smallest boy in his class. Willy learned the agricultural technology trade. He was soon intimately familiar with the inner workings of every form of farming machinery around.

He was really too young for marriage. With his wife and two sons he settled into a new apartment. At the age of twenty, he seemed to already be a part of the world of adulthood, a world which his contemporariers were only beginning to explore. Uniformity and boredom crept unnoticed into his marriage with Ingeborg, the milkmaid. New love entered Willy′s life in the form of an agriculture student. He followed her to the town of Graefenhainichen. In 1988, she bore Willy a son, Kevin. This new relationship combined with the political transformation in East Germany and the home-hitting insecurity over jobs has given Willy a new perspective on life. Thus has his film record of everyday life in East Germany unexpectedly developed into a documentary of the adversities and challenges which came in the wake of German reunification.