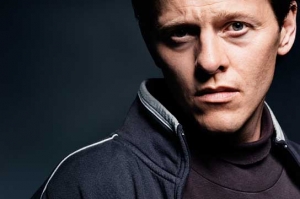 Thure Frank Lindhardt was born in Copenhagen on December 24, 1974. At the age of twelve, he already appeared in  Danish feature films, and following his high school graduation he attended an acting school in Odense until 1998. He then performed in numerous Danish stage, TV and film productions. He received rave reviews and a nomination for the Danish film award Bodil for his portrayal of a man suffering from autism in the drama "Her i nærheden" (DK 2000).

In 2004, he was featured in two memorable German film releases: Michael Klier's "Farland" and Achim von Borries' "Was nützt die Liebe in Gedanken" ("Love in Thoughts"), in which he played the lover of suicidal Günther Scheller (August Diehl). Since then, he has regularly appeared in German productions apart from his work in Denmark.

Lindhardt was again nominated for the Bodil Award for his performance in the Danish crime drama "Nordkraft" (2005). He received yet another Bodil nomination – as well as a nomination for the 2008 European Film Award – for his portrayal of a Danish WWII resistance fighter in "Tage des Zorns" ("Flame & Citron", DK/DE).

After appearing as a Swiss Guardsman in the Hollywood production "Illuminati" (2009), he played a homosexual director whose relationship with a drug-addled lawyer comes to a tragic end in Ira Sachs' autobiographical romance "Keep the Lights On" (2012). This performance garnered Lindhardt several nominations and acclaim from critics. He went on to star in "Formentera", which premiered in the Forum section of the 2012 Berlin IFF.

Lindhardt was cast in the role of kidnapper Wolfgang Priklopil for the screen adaptation of Natascha Kampuschs autobiographical account "3096 Tage". The film was released in Germany in February 2013.

In 2015, he then stood in front of the camera both for the "Tatort" episode "Spielverderber" with Maria Furtwängler as the commissioner and for a TV adaptation of Siegfried Lenz's novella "Schweigeminute." In 2016, the third season of the internationally successful series "Bron" ("The Bridge", DK/SE/DE) was broadcast on German television, in which Lindhardt plays Danish investigator Henrik Sabroe alongside Sofia Helin's Swedish Commissioner. He took on this role again in the fourth and final season, which aired in 2018.

Also in 2018, filming for the romantic drama "Of Love and War" (DK/DE/CZ) took place, in which Lindhardt played the right hand of the antagonist of the main character, a soldier returning home from war.

Over the next few years, Lindhardt appeared primarily in television productions. He was part of the cast of the three-part series "Tsunami" (2020) and the series "Death of Friends" (2021), among others.

In February 2021, Lindhardt was among the 185 lesbian, gay, bisexual, queer, non-binary and trans* signatories of the #actout manifesto and with it part of the mass coming-out on the front page of the Süddeutsche Zeitung magazine. Initiated by Karin Hanczewski, Godehard Giese and Eva Meckbach, the initiative positioned itself against discrimination and called for more visibility and diversity in the theater, film and television industry.

In the Danish docudrama miniseries "Krag & Virkner" (2022) he had the leading role of the Danish politician Jens Otto Krag. On the big screen, he appeared in the award-winning Danish family drama "Du som er i himlen" ("As in Heaven," 2021) and in the social drama "Zwischen uns" (2021), which opened in theaters in June 2022.