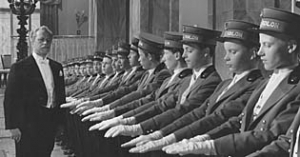 The film retells the nearly 40-year long history of the famous German hotel in twelve episodes, from its opening in 1907 by Wilhelm II to its destruction in a fire shortly before the end of World War II. Director Josef von Baky who had once managed the hotel himself based his film mainly on Hedda von Adlon′s autobiography and not only shows the illustrious guests of the hotel but also its employees. Through several historic and personal events, the film continually accompanies two protagonists, the page Paul Rippert and his wife Ninette.