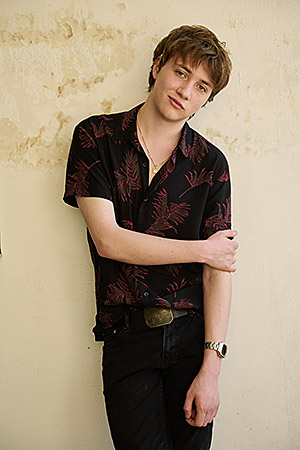 Michelangelo Fortuzzi was born on 23 January 2001 to Italian stage actor Alberto Fortuzzi, who lives in Germany. He made his first appearance in front of the camera in 2013, in a small role in the feature film "Kopfüber" ("Upside Down"), followed by a part in Anna Justice's TV two-parter "Pinocchio" (2013), in which his older brother Valentino also made an appearance. He got his first leading role in the TV family drama "Inga Lindström - Familienbande" (2016), as the rebellious adoptive son of a crisis-ridden couple.

He was noticed for his leading role in the highly acclaimed TV drama "Alles Isy" ("Isy Way Out", 2018, written and directed by Mark Monheim and Max Eipp), as a teenager who rapes his drug-addicted best friend and is subsequently plagued by feelings of guilt. At the German Television Awards, Fortuzzi was awarded the Advancement Prize for his performance. He had a leading role in the TV movie "Einmal Sohn, immer Sohn" (2018), as the son of a middle-class family, who is happy about his grandmother, a prominent feminist (Christiane Hörbiger), temporarily moving into their house.

In addition, he played a German-Italian teenager in the youth series "Druck" (2018-2019), who tries to find out about his sexual orientation. The "Tatort" episode "Leonessa" (2019) showed him in a leading role as a teenager from a broken home who secretly prostitutes himself and is suspected of murder.

On the big screen Michelangelo Fortuzzi belonged to the ensemble of the love and family story "Im Niemandsland" ("Love Between the Walls", 2019) and the coming-of-age drama "Nackte Tiere ("Naked Animals"), which premiered at the Berlinale 2020 in the section 'Encounters'. In early 2021, the streaming series "Wir Kinder vom Bahnhof Zoo", in which Michelangelo Fortuzzi belongs to the main cast, was broadcast.