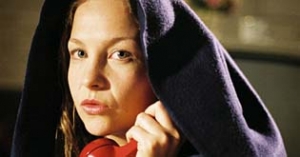 "Please, can you tell me another story? No, not a bedtime story. A really exciting one...," the voice of a lonely child begs somebody on the telephone. Craving for warmth and compassion, it is Irm, a woman in her early 30s. She calls strangers and, imitating a child`s voice, pretends she is a young cancer patient. In heart-rending conversations, she establishes relationships that she abruptly ends when they threaten to become too close. This is Irm`s way of reaching out from her life, a life in which she jobs in a laundrette and looks after her bed-ridden mother. Though no longer able to talk, her mother still makes it clear that her favorite was always Irm′s sister Margit. But now Irm has the upper hand and lets her know it.

When she meets the self-assured but emotionally vulnerable Sina, she comes up against a woman who is in great need of a friend and thinks she′s found her in Irm. Caught between the pull of her mother`s imminent death and her manipulative play-acting, Irm is increasingly drawn to the strong, life-loving woman who offers her friendship. She knows that Sina must learn the truth some day and is afraid of losing her. But Sina is more tenacious than she thinks - and believes in Irm more than she does herself.