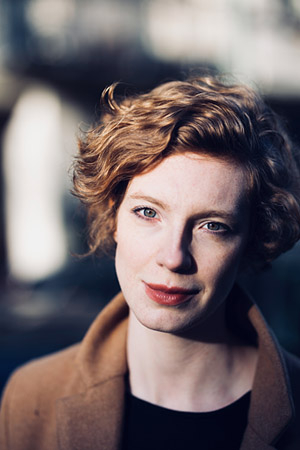 Luise Wolfram was born on 27 July 1987 in Apolda in the former GDR and grew up in Jena. She made her film debut in 1995, as a seven-year-old, with a supporting role in Helke Misselwitz' award-winning social drama "Engelchen" ("Little Angel"). She had a key role in 2002 in the "Polizeiruf 110" episode "Wanda's letzter Gang" (directed by Bernd Böhlich), as the daughter of an alleged crime victim (played by Wolfram's aunt Claudia Geisler).

From 2002 to 2005 she was a member of the theater group of the Music and Art School in Jena. After graduating from high school, Wolfram studied at the State Academy of Dramatic Arts 'Ernst Busch' in Berlin from 2006 to 2010. Immediately after her graduation she was accepted into the ensemble of the Schaubühne am Lehniner Platz in Berlin, of which she was a member until 2015. During that time she appeared on stage in productions of "Lulu" (2010), "The Talented Mr. Ripley" (2011) and "Tartuffe" (2013). Parallel to her work in the theater, she appeared in TV productions, such as in a leading role in the psychological thriller "Nie mehr wie immer" (2015, directed by Stanislaw Mucha), and in guest roles in various series.

In 2015 Luise Wolfram began working as a freelance actress. On television she played in episodes of the series "Der Kriminalist" and "Neben der Spur". She also appeared on the big screen as the estranged daughter of an embittered speculator (Henry Hübchen) in the children's film "Hanni & Nanni - Mehr als beste Freunde" (2017), as Princess Alix of Hesse in the Russian historical drama "Matilda" (2017) and in the relationship drama "Hingabe" ("Devotion", 2017), about a happy couple who are attacked on the street one night.

From 2016 to 2019 Wolfram had a regular supporting role as nerdy investigator Linda Selb in the "Tatort" episodes set in Bremen. In the second season of the successful series "Charité" (2019), she played the medical doctor Margot Sauerbruch. The TV movie "Was wir wussten - Risiko Pille" ("A Bitter Pill", 2019), starring Wolfram in a leading role as head of advertising for a pharmaceutical company, also received critical acclaim.

In the fall of 2020, the love and culture clash comedy "Kiss Me Kosher" ("Kiss Me Before It Blows Up") by Shirel Peleg was released in German theaters. In the film, Wolfram played a German woman who falls in love with a Jewish woman in Israel, much to the displeasure of the latter's grandmother.