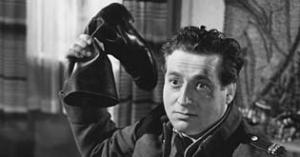 Horst Kube, born September 19, 1920, in Berlin, initially wanted to become a naval architect and served in the Navy during World War II. After the end of the war, he started to attend actor"s training at Harry Berber"s and made his first stage performance already in the same year at Berlin"s Märchentheater. Subsequently, he played small roles at several theatres and revues, for instance, in 1946 in the famous literary revue "Schall und Rauch" in Berlin. Back then, Kube already revealed his special talent for satirical undertones and comical typecasts.

After further engagements in Potsdam and in Frankfurt an der Oder, Kube joined Berliner Ensemble in 1953. In 1953/54, he made his movie debut in the drama "Gefährliche Fracht", directed by Gustav von Wangenheim. He then became permanently employed by DEFA and played numerous, mostly smaller roles during the following years in most diverse films, including Gerhard Klein"s film "Eine Berliner Romanze". During the shooting of "Schlösser und Katen" where Kube played a drunken man, Kurt Maetzig finally noticed his talent. Maetzig then gave him the leading role of Hannes Wunderlich, a good-natured policeman who commits a crime to help a girl he has fallen in love with in his film "Vergesst mir meine Traudel nicht" (1957).