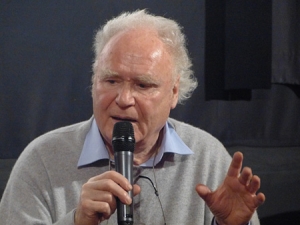 Helmut Herbst in the Deutsches Filmmuseum, Frankfurt am Main, on Oktober 11, 2012

Helmut Herbst was born in Waldbröl/Escherhof in 1934. From 1955 on, he studied art history and painting at Hamburg University and the Hochschule für Bildende Künste (HfbK). In 1959, he went on a fellowship to Paris in order to focus more on his paintings. During his stay, he became a frequent visitor of the Cinémathèque Française where his interest in film started.

In 1958, he completed his first animated film "Multiplane". Via Klaus Wildenhahn, Herbst became acquainted with the makers of the TV program "Panorama", for which he began to create animated segments in 1961. In 1962, he founded his Hamburg-based company cinegrafik. Over the years, the studio had up to nine employees and produced numerous animated short films, for instance for the German edition of "Sesame Street" and made-for-TV children's films, as well as for other TV formats.

In 1967, Herbst became one of the founding members of the Hamburger Filmmacher Cooperative that was itself inspired by US underground cinema. From 1968 on, he created TV documentaries on various topics, including a trilogy on art of the 20th century ("Deutschland DADA", 1968; "John Heartfield, Fotomonteur", 1977; "Happening Kunst und Protest 1968", 1979) and works which concerned themselves the with medium film (for instance "Synthetischer Film oder wie das Monster King Kong von Phantasie & Präzision gezeugt wurde", 1975).

From 1969 until 1979, Herbst was a lecturer at the Deutsche Film- und Fernsehakademie Berlin (dffb). During that time, he worked in film theory and began to publish academic writings. His film "Die Phantastische Welt des Matthew Madson", co-written by Klaus Wyborny, marked his foray into the science-fiction genre and was aired on German TV network ZDF in 1974.

In 1979, Herbst co-founded the Hamburger Filmbüro. While the staff of the cinegrafik studio was downsized to two, Herbst continued to work as a lecturer and beginning in 1980, he taught at the University of the West Indies in Kingston. 1982 saw the theatrical release of his film "Eine deutsche Revolution", and the following year, his animated short film "Sieben einfache Phänomene" won a German Film Award.

In 1985, cinegrafik relocated from Hamburg to the Odenwald region. The same year, Herbst became a professor at the Hochschule für Gestaltung in Offenbach, where he taught until 2000. Meanwhile, he sporadically returned to work as a director and author.  In 1992, he made the feature "Die Serpentinentänzerin", starring Ben Becker, Otto Sander and Eva Mattes. Working from a script again co-written by Klaus Wyborny, he directed the animated short "Container Interstellar" in 2001. In 2006, he completed the animated feature "Die Kathedrale der Gefühle" which is based on "Die Phantastische Welt des Matthew Madson".