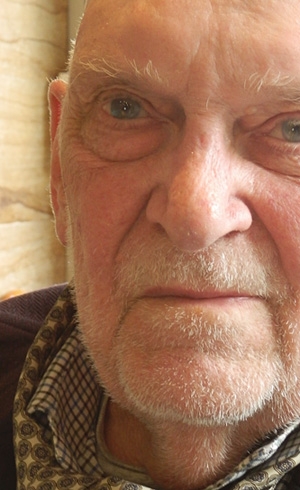 Klaus Wildenhahn was born on June 19, 1930 in Bonn. The only child of Max and Nora Wildenhahn (née Sochatzki), he relocated frequently until his family eventually settled in Berlin. From 1940 on, he attended the Herrnhuter boarding school in Lower Silesia. His father left the family before the end of the war, and young Klaus returned home to his mother who worked as a nurse. In 1949, he graduated from the Arndt-Gymnasium in Berlin-Dahlem, and subsequently enrolled as a sociology and publishing major at the Freie Universität Berlin. He received a one-year scholarship to attend the renowned Colgate University in Hamilton, NY where he studied political sciences. Yet in 1953, Wildenhahn dropped out of university, and in 1954, he began working as an orderly at Banstead Hospital, a mental institution in Sutton, England. To cope with the stressful work, he started to write poems and began to learn Japanese. This brought him together with Mizuki Inai. The two married and became parents of a son and a daughter.

In 1959, Wildenhahn returned to Germany where he had a tough time finding work. Eventually, a friend got him a job in the production of the TV lottery "Ein Platz an der Sonne" in Hamburg. He worked on over thirty lottery commercials, thus gaining first-hand experience in filming and post-production which would later prove very useful. He moved on within the NDR network to become part of the production staff of the investigative and influential news program "Panorama". After editing many features, Wildenhahn began to write and film his own contributions to the program, including "Der merkwürdige Tod des Herrn Hammarskjöld" (1961).

His TV work furthered his interest in the documentary format: A result was his non-fiction feature "Parteitag 64", which dealt with a party congress, and was imminently influenced by the aesthetics and methods of "Direct Cinema" established by US filmmakers Drew, Leacock, Maysles and Pennebaker in their likely themed "Primary" (1960). Wildenhahn especially taking his cue from Richard Leacock championed the use of handheld cameras with synch-sound and eschewed the use of artificial lighting, pre-arranged shots and voice-over. Suggesting urgency and authenticity in ways unknown before, the film marked a radical departure from the then-common conventions of TV broadcasting. Which is also why it was rejected by the network and only aired 17 years later in a shortened version.

Nevertheless, the network hired Wildenhahn as a documentary director on a permanent basis, and in 1964, he began working in the feature film department under the supervision of Egon Monk. There he continued to champion the principles of "Direct Cinema" in his productions, including the series "Smith, James O." (1965-66) which documented concerts of jazz organ player Jimmy Smith, the portrait of the eponymous musician in "John Cage" (1966), and "498, Third Avenue" (1967), a feature on choreographer Merce Cunningham. Already in 1965, Wildenhahn had focused on the opera with "Bayreuther Proben". The cinematography and sound of these films were provided by his close collaborators Rudolf Körösi and Herbert Selk. From 1967 on, Wildenhahn dedicated himself to the realistic and unflinching depiction of life in rural Germany. His film "In der Fremde" that follows a group of seasonal works and chronicles conflicts on a large construction site premiered at the Kurzfilmtage Oberhausen to rave reviews.

From 1968 until 1972, Klaus Wildenhahn taught at the Film- und Fernsehakademie Berlin (dffb). There he co-founded the collective "Gruppe Wochenschau" together with like-minded filmmakers, including Michael Busse, Gisela Tuchtenhagen, Gardi Deppe, Rolf Deppe, Thomas Mitscherlich, Cristina Perincioli and Hans Helmut Prinzler. The collective produced precise observations of the current political situation which were screened for the first time at the 1970 edition of the Kurzfilmtage Oberhausen. Wildenhahn also teamed up with students to make "Der Hamburger Aufstand Oktober 1923", an account of the historical workers' protest movement, which premiered a the 1971 Mannheimer Filmfestspiele. His work at the dffb also resulted in his first book on theory and practice of West German documentary film entitled "Über synthetischen und dokumentarischen Film". First published in 1975, it is today considered to be a seminal work on the subject.

After returning to Hamburg in 1972, Wildenhahn frequently collaborated with dffb acquaintance Gisela Tuchtenhagen who became his co-author and DoP. The two filmmakers – who were at times also romantically involved – preferred to work with as few production staff as possible. From the late 1960s on, Wildenhahn had started recording the on-scene sound himself in order to be close to the subject. The two part feature "Die Liebe zum Land" (1973/74) continued the critical exploration of rural Germany, and in 1975, production commenced on a multi-part documentary film which is often regarded as the essential work of Wildenhahn: "Emden geht nach USA" chronicles the fight of workers of the VW automobile plant in Emden against the planned move of production facilities to the US, thus predating the trials and conflicts of millennial globalization. With the film, Wildenhahn attempted to put his published theories on non-fiction and synthetic film into effect, and he eventually added a poetic essay film ("Im Norden das Meer Im Westen der Fluß Im Süden das Moor Im Osten Vorurteile. Annäherung an eine norddeutsche Provinz", 1976) to the four-part documentary he had completed in 1977. Although the later addition was harshly criticized by the regional press, Wildenhahn and Tuchtenhagen nevertheless won the 1978 Grimme-Award for "Emden geht nach USA".

In 1977, Wildenhahn and Gerhard Haag produced the radio feature "Wo die Kamine qualmen, da mußt du später hin" which aired in early 1979. Dealing with life in the coal mining districts, it also inspired Wildenhahns next film projects, including "Der Nachwelt eine Botschaft. Ein Arbeiterdichter" (1980), the two "Bandion" features and "Was tun Pina Bausch und ihre Tänzer in Wuppertal?" (1983). With the double portrait "Ein Film für Bossak und Leacock" (1984) Wildenhahn payed both homage to his inspirations and cinematically reflected upon his own approach to documentary theory and history.

The same year, Wildenhahn – who had moved from the feature film to the culture department of the NDR network – went to Englang to document the ongoing struggle of British miners in his film "Yorkshire". While the conflict between the unions and the Thatcher administration in Britain escalated, Wildenhahn's "Stillegung. Oberhausen Mai - Juli '87" depicted the eerie calm which followed the closure of the Thyssen steel works in the German town of Oberhausen. "Rheinhausen. Herbst '88" echoed this sentiment in its portrayal of people dealing with the decline of their local steel industry.

In 1989, Wildenhahn made "Reise nach Ostende" in which he traced the long-time repercussions of the trench warfare of WWI. The same year, the Akademie der Künste in Berlin (of which Wildenhahn had become a member in 1984) and TV station 3sat presented retrospectives of his work, followed by more retrospectives courtesy of the Leipziger Filmwoche and TV station Eins Plus in 1990. Meanwhile, Wildenhahn observed the effects of the imminent German reunification in "Der König geht. Schloss Dresden Sommer '90". Three years before, he had already worked in the GDR to shoot "Bln. DDR & ein Schriftsteller", an experimental portrait of East-German author Christoph Hein.

At the beginning of the 1990s, Wildenhahn – who remained an NDR employee until 1995 – worked in different fields and formats. In addition to the short documentaries "Nachruf auf einen Trainer" (1991) and "Konditors Nachmittag" (1991), he made feature-length films like "Noch einmal HH 4: Reeperbahn nebenan" (1991) or "Freier Fall: Johanna K." (1992). With "Reiseführer durch 23 Tage im Mai" (1993), Wildenhahn also returned once more to the subject of workers' protest, chronicling a three-week strike at an East-German steel plant.

His final two films for the NDR network (both made in 1995 and shot – for the first time – on video) dealt with the Balkan war: While "Die dritte Brücke" moves between the local battlefields and the European attempts to negotiate a peace, "Reise nach Mostar" is a personal, introspective account of Wildenhahn's very own perception of the destruction around him. Following his retirement, Wildenhahn published his second book "Mimesis und Wirkung der Schnulze. Filmtheoris Nr. 2". He also became a founding member of the "Filmwerkstatt Dokumentarisch Arbeiten e. V." that aims to further the tradition of critical documentary filmmaking.

In 2000, Wildenhahn's most recent film "Ein kleiner Film für Bonn" which chronicles the move of the German federal government from Bonn to Berlin premiered on TV. Afterwards, he withdrew from active film and television production. In 2004, he began a series of lectures and film programs titled "Der Körper des Autoren" in which he presents his favorite documentaries. On the occasion of his 80th birthday in June 2010, 3sat presented the portrait "Ostende, 3 Uhr nachmittags" and a DVD collection of selected films by Wildenhahn was released. Moreover, Quinka Stoehr's intimate portrait "Klaus Wildenhahn. DIRECT! Public and Private" premiered at the 2010 Hamburg Film Festival.

In 2011, Wildenhahn received the lifetime achievement award of the Mille Occhi Film Festival in Trieste, while the dokumentarwoche hamburg, a festival dedicated exclusively to new documentary features, named its Grand Prize after him. In March 2015, Wildenhahn published "Abendbier in flacher Gegend", a collection of old and new writings. Klaus Wildenhahn resides in Hamburg-Eppendorf and the Belgian town of Ostende.