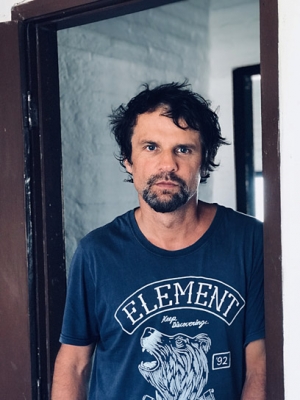 Hans Weingartner, born November 2, 1970, in the Austrian town of Feldkirch, studied physics, brain research, and neurosurgery in Vienna and Berlin from 1990 to 1997. In 1993/94, he simultaneously earned a diploma as a camera assistent in Vienna. In 1997, Weingartner enrolled at the Academy of Media Arts in Cologne and graduated in 2001 with the drama "Das weiße Rauschen" ("The White Sound"). Highly praised by many critics, "Das weiße Rauschen" won several awards, including the 2001 "Max Ophuels Prize", the award as "Best movie debut" of the Association of film critics, and the 2001 First Steps Award. Thanks to his intensive performance as a schizophrenic, leading actor Daniel Brühl, virtually over night, became one of the most sought-after actors of German cinema.

Weingartner's second film, "Die fetten Jahre sind vorbei" ("The Edukators"), was shown in the competition of the 2004 Cannes film festival, as the first German language film in the competition in eleven years. From the day of its premiere on, the film became an enormous success with critics and moviegoers alike. "Die fetten Jahre sind vorbei" won numerous awards, was shown at several festivals, and drew an audience of nearly a million viewers in Germany alone. Furthermore, the film's international rights were sold to over 50 countries.

Following his contribution to the compilation film "Deutschland '09 - 13 kurze Filme zur Lage der Nation" ("Germany ′09 – 13 Short Films About the State of the Nation"), which premiered at the 2009 Berlin IFF, Weingartner directed the feature-length drama "Die Summe meiner einzelnen Teile" ("Hut in the Woods"), which garnered him a nomination for Best Director at the 2012 German Film Awards.

Weingartner, who also acted as producer on Cüneyt Kaya's "Ummah - Unter Freunden" (2013), next helmed the road movie"303", which premiered at the 2018 Berlin IFF.