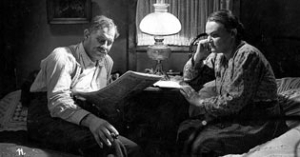 To Whom Does The World Belong?

Boenicke and his 18-year-old son Franz have both been unemployed for a long time. The working-class family lives in Berlin and is six months behind on the rent. Since the future is uncertain, no help can be expected from social services, and the father suffers under a bourgeois moral point of view, a quarrel breaks out in the family when Franz returns home, once again unsuccessful in finding a job. When Franz is finally alone in the apartment, he commits suicide by jumping out the window, thus solving his own problem. The family′s fate is unstoppable, and they eventually even have to move out of the apartment.

Daughter Anni′s friend Fritz recommends that they move to the tent camp "Kuhle Wampe", just outside of Berlin on Lake Mueggel. Among the others there, who have also experienced a similar fate, the Boenicke′s find a new home. However other problems arise, as Anni′s relationship to Fritz is not without its consequences. He wants his freedom, but nonetheless reluctantly proposes marriage to Anni. The celebrations take a negative turn and Anni leaves "Kuhle Wampe" and moves back to Berlin with a work colleague named Gerda. Shortly thereafter, Fritz loses his job as a truck driver. He cannot keep his mind off of Anni and takes off to look for her. He finds her among a group of young proletarian athletes, whose goal is to change the world to make it a better place.