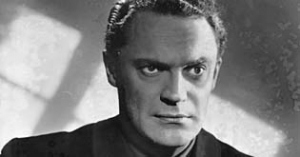 Gustav Diessl, born on the 30th December 1899 in Vienna, gained his first acting experience in 1916 at the Burgtheater in that city and also attended the Kunstgewerbeschule (School of Applied Arts) for graphic art and painting. Late in the First World War he was drafted into the Imperial Alpine Regiment and after release from Italian captivity in 1919, he joined a travelling theatre group.

At the beginning of the 1920s, Diessl went to Berlin where he was scouted by the film industry. He made his debut in "Im Banne der Kralle" (1921) directed by Carl Froelich and subsequently worked with G.W. Pabst on such films as "Abwege" ("The Devious Path", 1928) and "Pandoras Box" in 1929. His perhaps best remembered role he played in 1929 in "Die weiße Hölle vom Piz Palü" ("The White Hell of Pitz Palu"), a dramatic mountain film co-directed by Arnold Fanck and G.W. Pabst. Originally a silent film, it was later reissued with an added soundtrack. Diessl's first regular sound film was Pabst's "Westfront 1918" ("The Western Front 1918"). In Fritz Lang's "Das Testament des Dr. Mabuse" ("The Testament of Dr. Mabuse") he played a gangster trying to extricate himself from the influence of the all-powerful evil genius, Mabuse.

Diessl often portrayed complicated characters and, repeatedly, men with a dubious past. During the Nazi era he was frequently cast as a foreigner, shady type or even criminal.

During the filming of Herbert Maisch's "Starke Herzen" ("Strong Hearts in the Storm", 1937), in which he played a Russian, he met the Opera singer Maria Cebotari, who divorced her first husband and married Diessl in 1938.

Having filmed abroad several times before, Diessl acted mostly in Italian productions between 1941 and 1944. He appeared in Germany in Harald Braun's adaptation of Ibsen's "Nora". His last film role before the end of the Second World War was the Prussian Lieutenant Ferdinand von Schill in Veit Harlan's notorious Durchhaltefilm ("perseverance film") "Kolberg" (1945).

Two further films only appeared posthumously on screen; "Starke Herzen", already alluded to, and the crime thriller "Ruf an das Gewissen" which had finished shooting before the end of the war, but was only released in 1949.

As well as an actor, Diessl was a successful graphic artist with several exhibitions in pre-war Berlin. After a short-lived first marriage, he co-habited for several years with Camilla Horn. Two boys stemmed from his second marriage to Maria Cebotari.