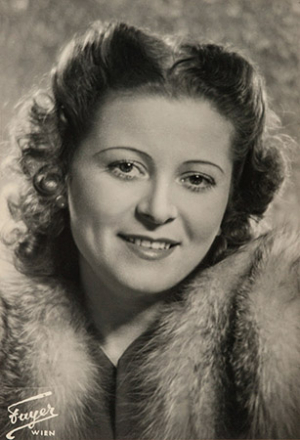 Maria Cebotar, born on the 10th February 1910 in Chishinau, then the capital of the Russian province of Bessarabia (now Moldova), grew up bilingual in Russian and Romanian. As a child she sought to contribute to the relatively impoverished family's means by singing. She was an established member of the church choir by the age of six and her wish to become an opera singer developed early on. She was so gifted that she was awarded a scholarship to the Conservatoire in Chishinau.

In 1928 the director of an off-shoot of the famous Moscow Arts Theatre which had emigrated to Prague discovered her: Alexander Vyrubov was then a well-known actor with some 20 Russian and two UFA films to his credit. He recognised Maria's talent for acting as well as singing and managed to persuade her parents to allow her to travel with his troupe from Eastern Europe as far as France. However, they turned down the offer of marriage from the 27 years older actor. Whilst on tour, Vyrubov added an "i" to Cebotar as her stage name. After a few weeks in Paris, success and money began to elude the troupe, which decided to retreat to Prague. At this point Vyrubov received an offer from UFA for work on a new film.

Before more advanced singing studies in Berlin, Maria Cebotari and Vyrubov travelled back to Chishinau where they married. She was quick to learn the German language and made her operatic debut as early as 1931, as Mimi in Puccini's "La Bohème" at the Semperoper in Dresden. In the very same year, Bruno Walter gave her an engagement at the Salzburg Festival. In 1934 she became the youngest ever singer to be honoured with the title "Kammersängerin". She remained with the Dresden State Opera until 1943 but was also a member of the Berlin State Opera from 1935 to 1943.

From the beginning of her career Maria Cebotari developed a busy schedule of guest appearances. On the opera stages of London, Paris, Milan and Zürich, she was an outstanding interpreter of the central female roles in the operas of Wolfgang Amadeus Mozart, Richard Strauss, Giuseppe Verdi and Giacomo Puccini.

The film industry also took note of her stage presence and popularity. She was able to sound-synch all of her own films, having added fluent German, French and Italian to her Russian and Romanian - even Spanish and some English. The director and opera specialist Carmine Gallone made several films with her in Italian. Cebotari gained a lot of popularity with her work on screen.

Whilst filming "Starke Herzen" in 1937, she fell in love with her co-star, Gustav Diessl, whom she married after her divorce from Vyrubov. They had two sons.

At the age of only 39, Maria Cebotari died not long after Gustav Diessl’s sudden death. In Dresden, Vienna, Salzburg and Chishinau streets are named after her. Plaques in Berlin and Vienna also perpetuate her name.