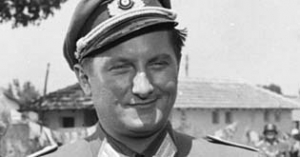 Erik S. Klein, born February 6, 1926, as Erik S. Klein, in Radebeul near Dresden, already attended actor's training with Erich Ponto while he was still at school and made his theatre debut at the age of 17 at Dresdner Komödie. He then was a cast member at theatres in Gießen and Lübeck before the war suspended his starting career as an actor and Klein was drafted for military service. He survived the end of the war in Belgian war captivity and resumed his theatre career in 1947 in different cities, including Freiberg, Altenberg, and Cottbus.

In 1954, he accepted Bertolt Brecht's and Helene Weigel's call and became a cast member of Berliner Ensemble where he stayed until 1961 and starred, for instance, as Lawrenti in "Der kaukasische Kreidekreis" ("The Caucasian Chalk Circle"), or as Roma in "Arturo Ui" ("The Resistible Rise of Arturo Ui"). In 1961, Klein went to Deutsches Theater where he became a cast member and stayed until 1970.

From the beginning of the 1970s on, Erik S. Klein started to work for film and TV productions. He became known to a large audience in the complex part of the Lieutenant in Konrad Wolf's "Sterne" ("Stars", 1959) and consolidated his reputation with the comedic multi-part TV series "Aber Vati!" (1973). In this comedy, the twin sons Kalle and Kulle are looking for a suitable wife for their father, single parent Erwin, played by Klein. He also authentically portrayed more serious characters, such as Untersturmführer Reineboth in Frank Beyer's "Nackt unter Wölfen" ("Naked Among Wolves", 1963).

Besides his work for theatre, movie and TV productions, Klein throughout his career also appeared in numerous radio plays, worked as a dubbing voice, or performed in satirical shows – he dubbed more than 300 characters in radio plays and was also the German voice of Philippe Noiret in the DEFA film version of "Der Uhrmacher von St. Paul" ("The Watchmaker of St. Paul", 1974), directed by Bertrand Tavernier.

After the German reunification, Erik S. Klein only sporadically appeared in movie productions but tried to start a comeback at Berlin"s Renaissance-Theater in plays like "Noch ist Polen nicht verloren".

In 1996, he suffered an accident and never fully recovered from it. On October 22, 2002, Erik S. Klein died in Eichwalde near Berlin.