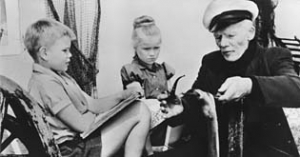 The fisher boy Matten wants to imitate the adults and sets out with his little weir to catch some fish. When he fails, he becomes the laughing stock of the other children and some adults as well. Only his little friend Mariken sticks by him. To prove himself, Matten puts himself in great danger. In search of a white sea shell which, according to legend, attracts shoals of fish by its singing, he sets out to sea at night. He gets caught up in a storm and the fishermen′s big weirs turn out to be a death trap when the boy gets stuck in them. Rescue comes in the form of his father and his friends. When his father realizes that he did not spend enough time with Matten, he wants to make up for his mistakes and helps him build a new weir. Suddenly, Matten is even able to catch fish.