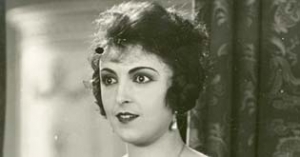 Eugenie (Jenny) Walter was born June 14, 1904, in Mürzzuschlag, Styria, as the daughter of a factory owner. After finishing convent school in Graz, she married the actor Emo Jugo at the age of 16 in Fiume, Italy. She went to Berlin with Jugo, but the couple separated only one year later.

In 1924, she received a three-year contract from Ufa, haplessly starred in several tragic roles and was lent to Phoebus after her film "Liebe macht blind" ("Love Makes Us Blind") had also flopped at the box office. With "prickly drolleries and flapper romance" (Holba, 1977), Jugo proved – for the first time in the Sternheim adaptation "Die Hose" ("A Royal Scandal") – her comedic talent and her self-mocking style.

After the advent of the sound film, her promising career seemed to come to an abrupt ending. Thus, Jugo finally took speech and acting lessons. At first, her acting talent was not challenged when she appeared in insubstantial comedies but then Jugo turned into the star of the characteristic "Jenny Jugo films": she became the favoured actress of director Erich Engels in whose comedies she not only "sported a fantastic appearance but also created a furore with her particular competence of reasoning." (Holba).

In the eleven films, Jugo and Engels made together between 1931 and 1941, she developed a carefree, at times rather bizarre form of humor that was able to transport Engels" enlightened comedies in an intelligent and bold, charming and boyish way. In comedies that dealt with everyday life and were rich with allusions like "Wer nimmt die Liebe ernst?" ("Who Takes Love Seriously? "), or "Pechmarie" ("Hard Luck Mary"), as Eliza in "Pygmalion", and in ready-made period films, Jugo's vivid performances always led to contraband.

"Her revealing art of acting contributed in facilitating the audience's access to a "true reality". She was what Bert Brecht had called a "simple natural", a character that called for the case of the opposition in the clown's mask." (Holba). In 1949, Jenny Jugo withdrew from the film business. She lived on her own farm in Schönrain near Bad Heilbrunn, Upper Bavaria where she died on September 30, 2001.