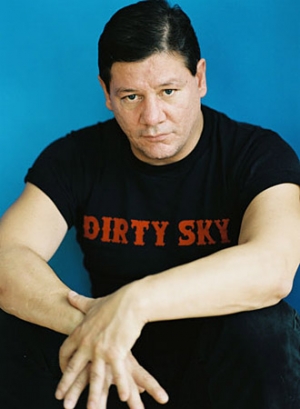 Claude-Oliver Rudolph was born November 30, 1956, in Frankfurt am Main. He grew up in Bochum and became interested in film from an early age. Aged fifteen, he started shooting substandard films. Three years later he was discovered as a stage actor by Peter Zadek.

He studied philosophy, psychology, and dramatics, attended the renowned "Actor's Studio" in New York, and worked as an assistant to Jiri Menzel. Until the early 1980s, Rudolph mainly performed at the Volksbühne in Berlin, the Theater am Turm in Frankfurt, the Alte Oper in Frankfurt, and the Prinzregentheater in Munich. He made his big screen debut in Wolfgang Petersen's classic "Das Boot" ("The Boat", 1981), in which he played the small role of a machinist. Subsequently, he played supporting roles in various cinema and television productions. Due to his heavily built appearance, Claude-Oliver Rudolph is usually cast as shady racketeer or brutal thug. Examples include the TV mini-series "Der Schattenmann" and his impressive role in Ralf Huettner's thriller movie "Der kalte Finger" (1995/96), in which he turns a car upside down, using only his bare hands.

With his roles in the multi-parted miner's drama "Rote Erde" (1983) and Joseph Vilsmaier's epic movie "Herbstmilch" (1988), Rudolph has proven that he is also capable of playing more multi-faceted characters. Despite his movie successes, he continued to act on stage. In 1999, for example, he played the drum major in a critically-acclaimed production of Büchner's stage play "Woyzeck".

In 1987, Rudolph made his debut as a director with the documentary "Der dicke Rebell", which was co-produced by his old school-fellow Herbert Grönemeyer. In 1992, he caused a stir with "Ebbies Bluff". The crime caper, set in the boxing milieu, was written, directed, and produced by Rudolph. Thematically, the movie seemed to be in line with his film role stereotype.

In 1999, he followed in the tradition of Gert Fröbe, Klaus Maria Brandauer, and Götz Otto, by starring in the James Bond adventure "The World Is Not Enough" – although he only played the small role of a Russian colonel.

In the next few years, he appeared almost exclusively in television roles. He belonged to the ensemble of the Axel Springer biopic "Der Verleger" (2001), played a criminal henchman in the thriller "Novaks Ultimatum" (2003) and a villain in the children's film "Amundsen der Penguin" (2003). Most, however, he guest starred in numerous TV series, including "Ein Fall für zwei" and "SOKO Leipzig".

As a cinema director and producer, Rudolph created the romantic road movie "Dirty Sky" (2003), about a young escapee couple fleeing from the police. He also made music videos for various artists. As dubbing voice he lent his voice to Mickey Rourke in "The Wrestler" (US 2008). Otherwise Rudolph made himself very rare in the cinema. He gave a half-silk scrap dealer in the crime thriller "Kopf oder Zahl" (2009) and had a supporting role as commissioner in the scenes of the documentary drama "Chaostage - We are Punks!" ("Warriors of Chaos" 2009). In the Swiss science fiction film "Cargo" (2009) he portrayed a Russian astronaut, in "Gegengerade - 20359 St. Pauli" (2011) a possessed football fan. The American-German production "Robin Hood: Ghosts of Sherwood" (2012), a reinterpretation of the Robin Hood story as a zombie film, showed him as villain Guy of Gisbourne. As a producer, he was involved in the low-budget film "Klappe Cowboy" (2012) by Timo Jacobs and Ulf Behrens. Then he took on a smaller part as the "devil of Herrmannplatz" in Jacobs' big city fairy tale "Mann im Spagat - Pace, Cowboy, Pace" (2013-2016).

Starting in 2014, Rudolph played a regular supporting role in the series "SOKO Stuttgart" as Stuttgart's underworld boss. From 2016 to 2018, he worked for the Russian station RT Deutsch (formerly Russia Today), which is financed by the Russian state and is generally regarded as a propaganda broadcaster. There he hosted a talk show called "Clash", of which 20 editions were produced. On the big screen Rudolph starred in the low-budget action film "Tal der Skorpione" (2019) as a felon named Ruprecht Knochenhauer. In addition to his TV and film work, Rudolph also goes on tours at irregular intervals, reading texts by Klaus Kinski and Jacques Mesrine, among others.

Claude Oliver Rudolph was married to the actress Sabine von Maydell until 2004 and is the father of two children. His daughter Oona von Maydell is also an actress.