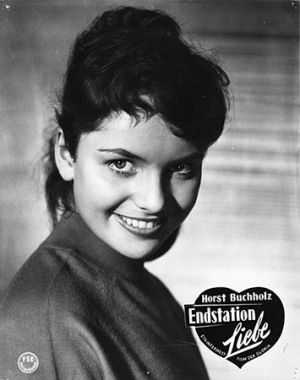 Barbara Frey was born on 17 November 1941 in Berlin. She completed an apprenticeship as a tailor before she came to acting at the age of almost sixteen: In 1957 she took part in a casting for the film "Endstation Liebe" ("Two Worlds") and was selected by director Georg Tressler for the female lead role alongside the then shooting star Horst Buchholz (who owed his big breakthrough to Tressler's "Die Halbstarken" ("The Hooligans") from 1956). In the romantic drama "Endstation Liebe" Buchholz played a womanizer who unexpectedly falls in love with his latest conquest (Frey). Although the movie couldn't tie up to the success of "Die Halbstarken" as hoped for, it still got Frey further role offers.

She took acting lessons with Marlise Ludwig and appeared mainly in youth and love dramas. For instance in "...und noch frech dazu!" ("And Saucy at That", 1959) and "Mit 17 weint man nicht" ("17 Year Olds Don't Cry", 1960). In Georg Tressler's social melodrama "Geständnis einer Sechzehnjährigen" (1960) she embodied a teenager who wants to prevent her parents' divorce; in the social drama "Ich kann nicht länger schweigen" (1961) she was a sixteen-year-old who out of desperation undergoes an illegal abortion and dies in the process. Marcel Ophüls cast Frey in his contribution to the much lauded episodic film "Liebe mit zwanzig" ("Love at Twenty", FR/IT/DE 1962) as a pregnant woman who finds the father of her child again.

From 1963 Frey also took on several television roles, for example in the crime thriller "Nachtzug D 106" (1963) and the comedy "Brave Diebe" (1965). She had further appearances on the big screen in crime movies like "Das Haus auf dem Hügel" (AT/FR 1964) and "Kommissar X: In den Klauen des goldenen Drachen" ("Agent Joe Walker: Operation Far East", 1966). Then the role offers for Frey in Germany and Austria became rarer.

Instead Frey played in several Italian (co-)productions. In the Italian-Spanish-German adventure film "Die hundert Ritter" ("100 Horsemen", 1964) she had a leading role as the Spanish mayor's daughter who falls in love with the son of an enemy sheikh. While shooting this film, Frey met the American actor Mark Damon, who at that time worked almost exclusively in Europe; later the two became a couple. In Italy Frey also shot the Italo-Western "Uno straniero a Sacramento" ("Bounty for Ringo", 1965) and "Pistoleros de Arizona" ("The Hunted of the Sierra Nevada", 1965; uncredited as an saloon guest). Carlo Lizzani's realistic Western "Mögen sie in Frieden ruh'n" ("Requiescant", IT/DE 1966) was praised by critics. In the film she played a leading role as the hero's kidnapped stepsister; Mark Damon embodied the villain, another leading role was played by Pier Paolo Pasolini. A little later Frey retired from acting. Whether the reason was a lack of role offers or her relationship with Mark Damon is not known. She played her last role in 1967 in the three-parter "Ein Mann namens Harry Brent". She married Mark Damon in 1971, but the marriage only lasted two years. During this time, Frey only had a brief appearance as a nurse (again uncredited) in George Roy Hill's "Slaughterhouse-Five" (US 1972). After that she did not make any further appearances on screen.