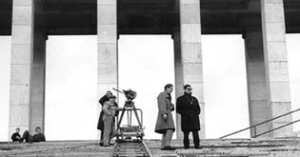 The film uses an essay form to examine the relationship between National Socialist ideology and architecture. The increasingly brutal face of the regime finds its mirror image in increasingly monumental buildings. The final take shows the overgrown ruins of the post-war period as a sharp contrast, yet also as a logical consequence of the previous developments. Audio documents from the National Socialist regime, such as Hitler speeches, readings of NS files or the memories of concentration camp commander Höss provide the soundtrack for the film.