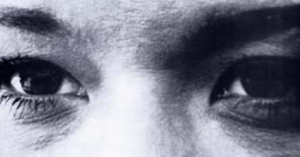 Elisabeth is studying photography and Rolf is in medical school. They’re in love, so marriage is a given. And it’s also in line with Elisabeth’s credo that "every woman should get married". Children quickly follow – another expression of Elisabeth’s strong will. But their "new happiness" suffers from her dominance. Rolf quits school. He leaves the family for a while, works first as a pharmaceuticals rep, then resigns to work for a cosmetics company. After all, he has five children to feed, although he has already performed an abortion on Elisabeth. The two turn to religion, but Rolf can’t find salvation …

"It was just all too soon, too fast." Edgar Reitz embedded his story of the catastrophe of a young couple that is unable to live up to their own idealized expectations in a consciously artificial film, "which undertakes to portray societal reality as an archetype" (Enno Patalas, 1967). Avant-garde structural elements such as off commentary, close-ups, captions and interviews are interjected into the film narrative. And they, no less than anything, were part of the reason Reitz won the prize for best first film at the Venice Film Festival.