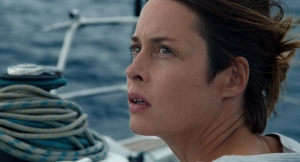 Rike is forty, she is a successful doctor whose job demands everything of her. She intends to use her much-needed annual holiday to fulfil her long-cherished dream of sailing single-handedly from Gibraltar to Ascension, a small tropical island in the middle of the Atlantic. Her desire for a carefree holiday seems to be coming to pass but then, after a storm, her beautiful adventure suddenly turns into an unprecedented challenge when she spots a badly damaged, hopelessly overloaded refugee boat nearby. More than a hundred people face drowning. Rike tries to organise help, but she increasingly feels that humanitarianism has deteriorated into mere wishful thinking. Wolfgang Fischer's film depicts a struggle for survival at sea which makes palpable the cruelty of the situation for people in dire straits whose fate is determined by others. The ocean becomes the scene of an allegorical, existential drama.