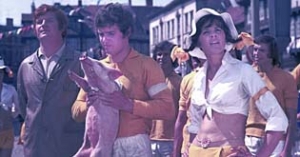 For some time now, the residents of the placid little village of Sonnenthal talk only about one topic: Football! The ambitious mayor wants to promote the Sonnenthal team to the district league at any price because this success would also boost his own popularity. But he did not expect the resistance of the new head of school, Barbara, who is heavily annoyed by the one-sided focus. To bring Sonnenthal′s men and the mayor in particular to their senses, Barbara sets up a women′s football team that soon turns out to be a serious competition for the men′s team.