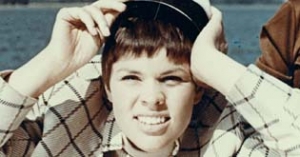 Chris Doerk was born in the East-Prussian town of Königsberg (today Kaliningrad, Russia) on February 24th 1942. In the German Democratic Republic, she was best known for her work as a singer and as the show partner of her then-husband Frank Schöbel. During her apprenticeship as a decorator, she started taking singing lessons and began performing in public. In 1967, she became a professional artist and two years later won the Song Contest of the GDR alongside Schöbel.

She went on to become one of the most popular singers in East Germany. Together with Schöbel, Doerk was host of the TV-programmes "Treff mit Chris und Frank" and "Disco Treff". Moreover, Doerk acted in several DEFA film productions, among them the teen comedy "Heißer Sommer" (Hot Summer), which also starred Schöbel and achieved a cult status over the years. Her concert tours led her as far as Cuba, where she enjoyed great popular success. In 2003, Doerk published the non-fiction book "La Casita", in which she writes about everyday life and the social situation in Cuba.