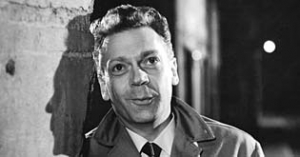 Rolf Herricht was born October 5, 1927, in Magdeburg. In 1943, he finished high school and was deployed as a child soldier for Volkssturm at the end of World War II. In 1945, he started to work as a property master and stage manager at Theater Magdeburg. At the same time, he started to attend drama school at Schauspielstudio. During his early acting career he performed at theatres in Salzwedel, Stendal, Güstrow, and Frankfurt an der Oder from 1946 on. In 1955, he returned to Magdeburg and became a cast member of Magdeburg’s theatre where he stayed until 1959. In 1964, Rolf Herricht became a cast member of Berlin’s Metropol-Theater and was associated with the theatre until he died.

Herricht met fellow actor, writer, and director Hans-Joachim Preil already in 1951. The encounter marked the start of successful collaboration that lasted nearly 30 years. Together, they performed as a comic duo in witty sketches. Preil played the role of the notorious wise guy, while Herricht played the part of his amiable and seemingly naïve counterpart. Due to the enormous success of their performances, Herricht became known all over the GDR. This prominence paved his way to TV productions and also to feature film productions for DEFA.

On TV, Rolf Herricht proved his comic talent, for instance, alongside his show partner Helga Hahnemann in the TV entertainment shows "Ein Kessel Buntes" and "Helgas Top(p)-Musike". Furthermore, both of them appeared repeatedly in DFF’s Maxe Baumann TV comedies as a married couple and friends of the title character, played by Gerd E. Schäfer.


In 1959, Herricht made his feature film debut as young construction worker Edwin in "Die Musterknaben". He then played a number of smaller roles, for instance, in the crime film "Seilergasse 8" (1960), and in the spy film "For Eyes only (Streng geheim)" ("For Eyes Only", 1963). But he was not able to emphasize his acting capabilities until screenplay writer Mauricy Janowski and director Gottfried Kolditz developed a comedy with Rolf Herricht in mind. In the love comedy "Geliebte weiße Maus" ("The Small White Mouse"), he played a shy traffic policeman who is drawn to a beautiful stranger he meets every day at his workplace, an intersection in Dresden.

The film turned out to be a huge success and subsequently brought Rolf Herricht a large number of leading and supporting roles in comedies during the following years. But already the second film with Herricht in a leading role was banned by the eleventh plenary session of SED’s Central Committee. In the eyes of the committee, the crime comedy "Hände hoch – oder ich schieße!" with Herricht in the role of criminal investigator Holms who is downright sickened by the low crime rate in his town did cast a negative light on the authorities. Despite numerous alterations and cuts, the film never entered the movie screen until the original version of the comedy was completely reconstructed on the basis of the screenplay in 2008/2009.

With "Der Reserveheld" (1965), Herricht was able to tie in with the success of "Geliebte weiße Maus". In the film, he played the actor Ralf Horricht who is assigned to do his duty in the NVA military reserve, then clashes with strict captain Hottas und in doing so turns the whole military post upside down. In "Meine Freundin Sybille" (1967), Rolf Herricht plays an assistant tour guide who embarks on an odyssey through the Black Sea region searching for two missing tourists. And in "Der Mann, der nach Oma kam" (1971), Herricht plays the TV comedian Günter Piesold whose home descends into chaos after the departure of grandmother Piesold.

Repeatedly, Herricht starred alongside Manfred Krug, for instance, in "Hauptmann Florian von der Mühle" (1968). Alongside star entertainers Frank Schöbel and Chris Doerk, he appeared in "Nicht schummeln, Liebling! " ("No Cheating, Darling", 1973). In the late 1970s he starred in his last film for the movie screen. In "Der Baulöwe" (1979), Rolf Herricht once more starred in the role of a successful actor who wants to build a home at the Baltic Sea shore and who is driven to the verge of nervous breakdown in the course of the construction work.

On August 23, 1981, at the age of 53, Rolf Herricht died from a heart attack during a performance of "Kiss Me, Kate" at Berlin"s Metropol-Theater.