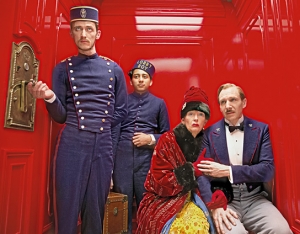 A hotel foyer is not unlike a stage, and legendary concierge Monsieur Gustave is the tacit director of many a wonderful entrance or exit in this particular hotel. He knows the proclivities and secret desires of his eccentric guests who come from far and wide. Some of the ladies in particular are most grateful. One such individual is quirky Madame D, who bequeaths Gustave a valuable Renaissance painting. Her resentful son Dimitri accuses Gustave of having murdered his mother and of legacy hunting. Gustave winds up in prison. But thanks to his knowledge of human nature, a bald fellow inmate and some gaudy patisserie, he manages to secure his release. When turbulent events show no signs of abating, lobby boy Zero Moustafa becomes his confidante. Together they set off in search of the missing painting. They soon find themselves caught up in a dangerous row about family assets as well as in the turmoil of a rapidly changing society between the wars.

Wes Anderson specialises in enigmatic tragicomedies peopled by eccentric individuals. His work was previously screened at the Berlinale Competition in 2002 with "The Royal Tenenbaums" and again in 2005 with "The Life Acquatic".