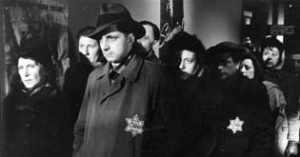 Marriage in the Shadows

Actor and actress Hans and Elisabeth Wieland are a happily married couple. In November of 1938, however, Elisabeth, who as a Jew has lost her right to perform on stage, is witness to a terrifying pogrom. She decides to leave her husband and to emigrate. Hans, who is an acclaimed actor, neither can nor wants to separate from his wife. At the outbreak of the war, Hans is mustered into the armed services. And Elisabeth, in constant fear, can do nothing but wait - with yearning in her heart - for Hans′ letters. Elisabeth is assigned work in an armament factory, where she must carry out hard chores of manual labor.

One day she sees how a friend of hers is arrested, and as she returns home, aghast with horror, she finds her husband who, because of his profession, has been discharged from military service. However, the conditions of his military discharge explicitly specify that he must divorce his Jewish wife. Despite being told not to take his wife to a film premiere, Hans does so anyway. And he must now face the detrimental consequences of his disobedience: his permission to perform on stage has also been revoked, Elisabeth is scheduled to be deported, and once again he is placed under pressure to divorce his wife. Both finally decide to commit suicide.