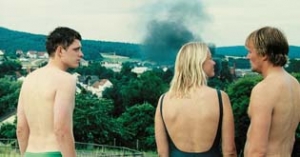 19-year old Paul is the main protagonist of Ulrich Köhler's movie debut as director. Paul is doing his military service but deserts from the army on the way back from a maneuver. He is absent without leave and hides in his parents' bungalow in the middle of nowhere of the Hessian province. While his parents are on vacation, Paul becomes more and more apathetic during his stay in the bungalow. Paul's aggressions only break out when he gets into a fight with a former schoolfellow.

When Paul's older brother Max also comes to their parents' bungalow with his girl-friend Lene, tensions heat up between the two brothers. Although it is hard to relate to Paul′s actions in any way, it is equally difficult for Paul to escape his aimlessness.