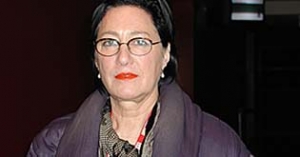 After graduating from school in 1957/58, Helke Sander, who was born as the daughter of an engineer, attended drama school in Hamburg. In 1959, she married the Finnish author Markku Lahtela (who died in 1981). After the birth of their son Silvo, Sander relocated to Helsinki where she studied German literature and psychology from 1960 until 1962. Between 1962 and 1965, she produced stage plays in several Finnish cities. Furthermore, she arranged happenings and improvisations. In 1964, she directed movies for Finnish television.

Sander returned to Germany in 1965 and worked intermittently as a lawyer"s secretary. From 1966 until 1969, she studied at the German Film and Television Academy Berlin. In 1966, she shot her first short film, "Subjektitüde". She also got involved with the German students movement. In 1968, she directed the critical documentary "Brecht die Macht der Manipulateure" ("Break The Power Of The Manipulators"), an analysis of the protest campaign against the Springer press group. Sander is a co-founder of the Berlin "Aktionsrat zur Befreiung der Frauen" ("Coalition for the Liberation of Women"). In the autumn of 1968, her widely-noticed speech at the delegate conference of the Socialist German Student Union in Frankfurt/Main initiated West Germany’s women’s movement.

Sander’s political activities are reflected in her movies. Thus, "Kindergärtnerin, was nun?", "Kinder sind keine Rinder" (both 1969) as well as "Eine Prämie für Irene" ("A Bonus for Irene", 1971) were inspired by her engagement for alternative kindergartens, while "Macht die Pille frei?" (1972/73) calls for the legalization of abortion. In 1973, Sander co-organized the first international women’s film seminar in Berlin. In 1974, she initiated the magazine "Frauen und Film", the first European feminist film journal, which she published until 1981.

In 1977, Sander directed, wrote and starred in her first feature film "REDUPERS – Die allseitig reduzierte Persönlichkeit" (1977), an essayistic mixture of documental and staged episodes. Despite their inherent political statements, "REDUPERS, Der subjektive Faktor" (1980/81) and "Der Beginn aller Schrecken ist Liebe" ("Love Is the Beginning of All Terror", 1983/84) are at the same time very personal films. It is this combination of individual and broadly political perception that characterizes Sander’s feature films.

In addition to working on her own movies, Sander also writes books and articles. Since 1981, she holds a professor’s chair at the University of Fine Arts in Hamburg. Furthermore, she continues to direct short films such as "Aus Berichten der Wach- und Patrouillendienste" (1984–86), as well as documentaries such as "Die Deutschen und ihre Männer" (1989) and "BeFreier und BeFreite" (1990–92), in which she dealt with the mass rapes of German women by Allied soldiers after the end of World War II. "Muttertier Muttermensch" (1999) examines the views of today’s women concerning the maternal role. "Dorf" ("Village", 2001) depicted life in a tiny village on the former border strip between the GDR and the FRG.

As an independent production, Sander realized the documentary "Mitten im Malestream" (2005), about the struggles for direction in the early phase of the new women's movement at the end of the 1960s. One focus is on the movement's original idea, which had fallen into oblivion, of changing society in a way that women could bear children without suffering any disadvantages as a result. "Mitten im Malestream" opened in cinemas at the end of 2005. It is Helke Sander's last film to date.