Entertainment and Ideology in "Die Feuerzangenbowle" 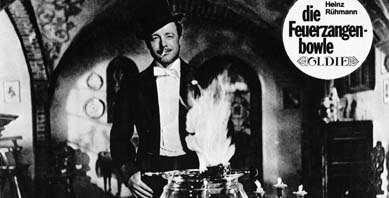 That this 1944 comedy is anything but a harmless bit of entertainment from the Nazi era, a mere diversion for the Reich Germans in the final stages of the war, is something that Karsten Witte already pointed out in 1976. Among other things, Witte analyzes the dissolves in the film by which "Rühmann's transformation from mature man to schoolboy" was visualized, and he identifies them as symptomatic of National-Socialist films. Witte discovers in this "transformation in reverse" a "uniform phenomenon from 'Ewiger Wald' to 'Feuerzangenbowle' ". The link between Rolf von Sonjewski-Jamrowski's propagandistic "Kulturfilm" "Ewiger Wald" (The Enchanted Forest, 1936) and "Feuerzangenbowle" is perhaps even more apparent elsewhere.

"No other film of the Third Reich", argues Witte in his discussion of "Ewiger Wald", "so openly depicts its view of the world as a world view — one defined by the desire for a reverse transformation from history to nature." The forest was meant to be Germany, and Germany the forest; and this powerful metaphor was inflated with a biologistic appeal to nature as an identity- and Volk-creating pureness. In his book "Crowds and Power", Elias Canetti commented on the history of this "mass symbol of the Germans" and wrote about the "forest-feeling" which with its emphasis on the vertical distinguishes "this forest from the tropical kind where creepers grow in all directions". 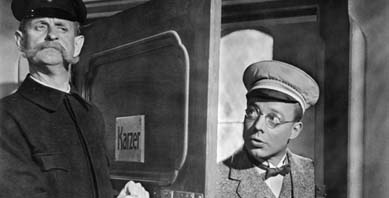 In this light, one passage from "Die Feuerzangenbowle" may been seen as particularly significant. The young head teacher Dr. Brett (Lutz Götz) — who is the only teacher who does not let himself be made a fool of by Pfeiffer and co., and is the only one whom Pfeiffer explicitly calls an "all right fellow" — is shown talking with his older colleague Bömmel (Paul Henckels) about his own successful teaching principles. "It would be a sad thing if a new era didn't bring with it new methods, too", says Brett, introducing his "new method": "Growing saplings must be bound so that they grow not crooked but straight; and so, too, is it with young people. Discipline is the rope that binds them — forcing a beautiful, straight growth!" The older colleague affirmatively rests his hand on Brett's shoulder and says, "Brett, what you said about the trees is well-said indeed." This ideal of "beautiful, straight growth" is resonant not only with the Nazis' racism, which advanced the notion of a supreme "Aryan race" associated with the "purity" of nature. Here, too, we find further confirmation of what Canetti described as the "feeling of the forest". The communication of ideological themes in "Die Feuerzangenbowle" thus happens in two ways — between Brett and Bömmel and between the film's narration and its viewers, for whom, in 1944, the identification of forest and nation was nothing new. This aspect of the film is all the more interesting when examined historically: This bit of dialogue appears neither in Heinrich Spoerl's screenplay nor in its first film adaptation, "So ein Flegel" (1933/34), which also starred Heinz Rühmann in the lead role. 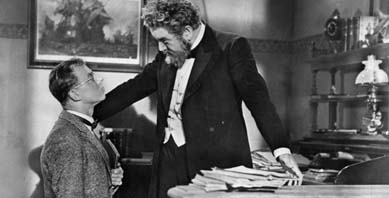 What is especially significant here is the phrase "the new era" which Brett the teacher is portrayed as representing. The Nazi state delivered its propaganda explicitly under this moniker: In his March 1933 Kaiserhof speech, propaganda minister Joseph Goebbels referred to National Socialism as the "new era"; it is hardly a coincidence that Baldur von Schirach's infamous marching song of the Hitler Youth contains the line "Our flag is the new era", and even less of a coincidence that this line makes a dramatic appearance at the end of the propaganda film "Hitlerjunge Quex". In "Die Feuerzangenbowle", the National Socialist ideological context sheds new light on Brett's actions, when he — the sole successful teacher, distinguished thus from his older colleagues, who may be seen as representatives of the Weimar generation — asks the students to choose "war or peace" and thereby speaks on behalf of that "new era". Brett, the new man, and the politics he advocates are heavily loaded features of this film comedy from National Socialist Germany.