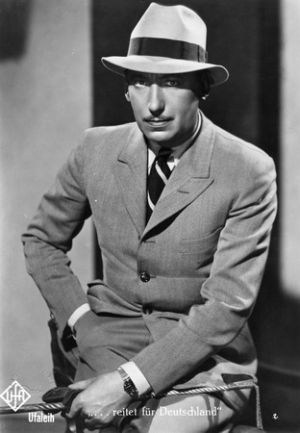 Wilhelm Maria Birgel was born in Cologne on September 19th 1891. As one of five children, he was expected to take over the business of his father, a goldsmith, and thus attended arts and crafts schools in Cologne and Düsseldorf. Yet already at the age of 16, Birgel wanted to be an actor and secretly joined a theatre troupe. In 1912, he was accepted at the acting school in Cologne and later performed on stages in Dessau, Cologne and Koblenz. The outbreak of WWI interrupted his career, and Birgel, who served in the artillery, was promoted to an officer rank during the war. In 1919, he returned to the stage, and over the years became a well-known and respected character actor. During a guest performance in Berlin, he was noticed by the UFA and at the age of 43, he got his first supporting role in a feature film, playing a British officer in Paul Wegener's "Ein Mann will nach Deutschland" (1934). At first he mostly played shady characters, but soon the charming gentleman became Birgel"s trademark role and made him an audience favourite.

His first leading part came with "Fürst Woronzeff", directed by Artur Robison. Along with prominent actors like Zarah Leander, Gustaf Gründgens and Heinrich George, he appeared in entertainment fare, but also in Nazi propaganda films, for instance "Feinde" (1940) and "Kameraden" (1941). In 1937, he was appointed state actor by Joseph Goebbels. Immediately after the war, Birgel"s previous participation in propaganda films and especially his performance as Ernst von Brenken in "Reitet für Deutschland" led to him being temporarily banned from performing by the Allied Forces.

Erich Pommer helped his return to acting in 1947 with "Zwischen gestern und morgen", and soon Birgel enjoyed success again. He became one of the most industrious movie actors of the 1950s, starring in popular films like "Das ewige Spiel" (1951), "Rittmeister Wronski" (1954) and "Johannisnacht" (1956). In 1959, he began a long-term engagement at the Schauspielhaus Zurich and from the mid-1960s on, he also appeared at the Bayerische Staatsschauspiel. Birgel made his last screen appearance in 1965, playing an aging writer – and sending up his own image – in Peter Schamoni's "Schonzeit für Füchse". In the 1960s, he received numerous awards for his lifetime achievement, including the German Film Award.

On December 29 1973, Willy Birgel passed away in Dübendorf near Zurich after suffering a heart attack.