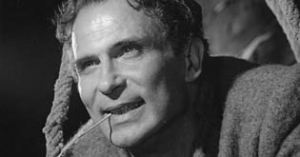 Ernst Wilhelm Borchert was born on March 13, 1907, in Berlin Neukölln. From 1926 to 1927 he attended Reichersche Hochschule für dramatische Kunst where he took acting lessons. He then worked as an actor for theatres in Erfurt, Cologne and Sondershausen. In Berlin he played at Volksbühne and at Deutsches Theater. From 1950 on, he changed to state-subsidised theatres. Borchert mainly portrayed the classic characters and heroes of drama history but played them as tormented and fragile figures. Among his directors were Fritz Kortner, Boleslaw Barlog and Boy Gobert.

Apart from his contribution to the documentary movie "Die von der Sanitätskolonne", Borchert's movie career did not take off before the 1940s, when he starred in Günther Rittau's films "U-Boote westwärts!" (1941) or "Der ewige Klang" (1943), for example. His most important role was the leading part of a traumatised war veteran who returns from the horrors of the war in Russia in Wolfgang Staudte's "Die Mörder sind unter uns" ("The Murderers Are Among Us") (1946), the first German post-war movie.

In following years, Borchert played further leading parts in "Herr über Leben und Tod" ("Master Over Life and Death", 1954) by Victor Vicas or "Hunde, wollt Ihr ewig leben" ("Stalingrad: Dogs, Do You Want to Live Forever?", 1958) by Frank Wysbar. From the 1960s on, Borchert appeared in fewer and fewer movie or TV productions. Instead, he returned to the stage and was appointed "national actor" for his artistic merits. Furthermore, he was the German voice of international movie stars like Henry Fonda or Alec Guiness.