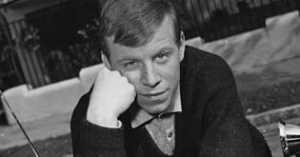 Michael Hinz was born on December 28, 1939 as the son of actors Werner Hinz and Ehmi Bessel. He initially wanted to become a singer, but after having attended a boarding school in England, he took acting classes at the Eduard-Marks school in Hamburg. After that he performed at the Thalia Theatre in Hamburg.

Director Bernhard Wicki discovered the 18-year old and gave him a role in his anti-war movie "Die Brücke" ("The Bridge") in which some schoolboys receive the order to defend a bridge without any strategic importance against the advancing American troops. The movie became an overwhelming success, received numerous awards, and was even nominated for the Golden Globe and the Oscar as Best Foreign Language Film. Hinz received the Berlin Senate Award for his performance and became famous throughout Germany almost overnight.

In the following years Hinz appeared in several other films, German and international ones, for example in the epic Hollywood production "The Longest Day" (1962) alongside stars like John Wayne and Henry Fonda. In 1963 he received the German Film Award for his portrayal of Fred Freytag in Ladislao Vajda"s "Das Feuerschiff". He also performed for example in Kurt Hoffmann"s "Lampenfieber", Rolf Hansen"s "Gustav Adolfs Page" and Hansjürgen Pohland"s "Katz und Maus" ("Cat and Mouse") for which he also wrote the screenplay based on a novella of Günther Grass. Hinz had his last appearance on the big screen in 1983 in "La Mort de Mario Ricci", directed by Claude Goretta.

Despite his great success as a movie actor, Hinz nevertheless continued to tread the boards. He played for example at Deutsches Theater Göttingen, Kleine Komödie Munich and Hamburger Kammerspiele. Several times he directed plays himself. But what made him particularly famous where his appearances in several television series like "Soko 5113", "Forsthaus Falkenau", "Aus heiterem Himmel" and lately "In aller Freundschaft", "Der Bergdoktor" and "Fünf Sterne".

Michael Hinz first married Ingrid van Bergen, in 1968 he married Viktoria Brahms, whom he met on the set of the series "Hauptsache Glück".